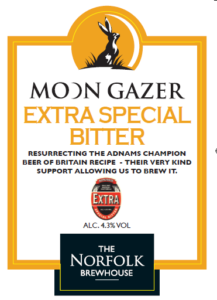 As a lad I was always taught – ‘if you don’t ask you don’t’ get’ so pretty much I have spent my life asking for things!

Mind you – I have to admit that I wasn’t too hopeful with one of my latest brainwaves – my desire to resurrect a classic beer as part of our Maris Otter brewery bar at The Great British Beer Festival – Winter.

It got a bit more complicated when beer guru, Melissa Cole, suggested that Adnams might be a good shout as many of their beers originally used Maris Otter.
So, nothing ventured nothing gained and a quick note to Fergus Fitzgerald – the Head Brewer at Adnams – was followed by lots of finger and leg crossing. Would such an iconic brewery let us loose on an old recipe?

Now, to his absolute credit there was no ‘umming or arring’ just a straightforward ‘pop down and we will go through the old recipes’.

That really is one of the genuinely fab things about brewing – in that we all like to get involved in stuff because it sounds like fun or interesting – the commercials are kinda secondary.

So, arriving at the Sole Bay Brewery, Fergus presented me with a pile of leather bound books which wouldn’t have looked out of place on the desk of Bob Cratchit – impeccably hand written with details of all the ingredients including, of course, Maris Otter.

Ok, I do have to fess up to one slight influence in our decision of which beer to brew. You see my command of bushels, quarts, pounds and ounces did tend to steer me towards the first fully metric recipe that we found – but what a cracker – none other than a former Champion Beer of Britain (1993); Adnams Extra Special Bitter.

For those old enough to remember ‘pre-craft’ – this is a 4.3% abv copper-coloured ale with gloriously hoppy, floral and herbal aromas which follow through on the palate, nicely balanced by the biscuity fullness of the malts and a dry tart bitterness.

As well as showcasing the malt talents of Maris Otter the ale also gives star billing to a marvellous English hop variety, the Fuggle, famous for its intense earthy bitterness. Following the copper boil with hops, the beer then lies on a deep bed of Fuggles to absorb even greater hop aroma and flavour.

It’s a great honour to be entrusted with the recipe and Bruce and myself will be doing our very best to brew a beer which will once again get the taste buds and tongues wagging.

However, you will need to be quick – this is a one-off resurrection ale – and will be launched at our brewery bar at GBBF Winter which takes place at The Halls, Norwich Feb 20-24.

There will also be some in Norfolk and Suffolk pubs during the festival – but as the saying goes – when its gone its gone.

Do pop along and have a pint and let us know what you think.

Cheers again to Fergus and Adnams your permission and support is very much appreciated.