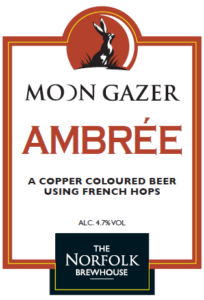 Well, last month saw us welcome the guys over from Northmaen Brewery, in France, in preparation for our collaboration beer for City of Ale in May.

I am happy to say that Norwich afforded them some great hospitality, convinced them of the need to master the art of bar billiards and also reminded them that eating isn’t necessarily part of an English night out. Needless to say good fun was had by all.

The guys left us some of their bottled ales to get us to start thinking about recipes and we are looking at developing a very nice, hoppy yet sweet golden ale with complex malt flavours going on as we marry Norfolk Maris Otter with the brewery’s own grown French barley for City of Ale.

However, we were also rather taken with a nice amber ale which they left us, so that spurred Bruce on to create an advanced recipe of our own. As its French we’ve got all arty and called it Ambreé.

The French version was a touch over 6% abv so we thought we would calm it down a bit to 4.7%, still strong enough to get good complex and robust flavours but acceptable to a wider range of drinkers.

To give the malt complexity we are using a Maris Otter base, but also a good quantity of 6 other malts, including Pilsner, Vienna and Melanoidin – a malt which adds a deep amber to red / brown colour with a flavour notes of honey and biscuit.

The hop base is the French Mistral – which you so enjoyed in our Belgique IPA – along with a good dose of Columbus, Centennial and Northern Brewer. The result will bring some pear, citrus, spicy and sherbet character to the ale.

So, all in all a rounded ale – inspired by our French friends but definitely a taste of North Norfolk.

In pubs early March for you to enjoy.