Moon Gazer are off to the biggest real-ale festival 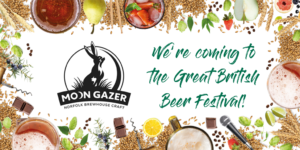 We are pleased that we will be serving a taste of North Norfolk at the world’s biggest real-ale festival as we are hosting a brewery bar at The Great British Beer Festival (GBBF).

The festival – organised by The Campaign for Real Ale (CAMRA) – is held at Olympia, in London and will run between Tuesday 6th and Saturday 9th August, and will attract some 60,000 + beer lovers.

For the last 3 years we’ve supported CAMRA’s Winter GBBF with a Maris Otter brewery bar which we ran with H Banham Ltd. We were able to support the winter festival as CAMRA had chosen Norwich as the host city for 3 years. Since the festival was on our doorstep we wanted to use the opportunity to raise awareness of Moon Gazer ales, but also remind visitors to Norfolk of the amazing barley grown here.

So, when the chance came to be invited down to the main summer festival, we jumped at it, allowing us to let visitors from all over the country to enjoy a pint of North Norfolk.

As to what they can enjoy that was a tricky decision as we could only showcase four of our beers.
So, we decided on;

Pond Hopper – we figured that our collaboration brew with Smartmouth Brewing from Norfolk Virginia would be a good one, bearing in mind that it is brewed so people can raise a glass to Norfolk on Norfolk Day and also in celebration of the farmers without who there would be no beer! Pond Hopper is packed with fruit flavours from USA and UK hops, with notes of pineapple, lemon and orange. Loads of hops but brewed for a soft bitterness.

It also shows that although we are a small brewery we like to collaborate and innovate with other brewers as well as push the county whenever we can.

Nibbbler – it might be the height of summer but our ruby ale is proving so popular and since its refresh and name change seems to have won a whole new fan base.

Pintail – one of our best-selling ales and also a gluten free offering. Light golden with a single New Zealand hop this easy drinking pale ale should be a hit.

Bouchart – completing the line up is our 4.9% mild. Gold Winner in Champion Beer of Norfolk 2018 (Old ale/strong mild category) it seemed only fair that we fly the flag with a Norfolk Champion.

As well as serving the beer we will have some Moon Gazer giveaways too!

You can pick up a pin badges with your Pintail and beer mats with your Bouchart. We even have some Moon Gazer caps too, and a competition where you could win 48 bottles of our ale.

So do pop along and see us in the Grand Hall, bar 11g, or just look for the Moon Gazer hare, and stop staring start gazing.

Hope to see you there.