What’s in a name? Meet Jigfoot

The Jigfoot – watch the hare embrace all around it and dance in celebration. 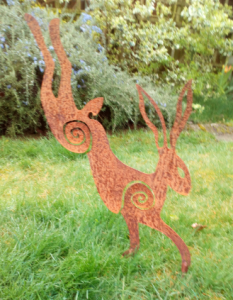 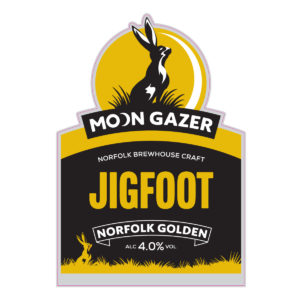 It was a windy day in North Norfolk and not a soul was in sight…but, up in the fields something was a foot for a joyous celebration of the wonders of the world around.

For it was here – with views seemingly stretching for miles across rolling hills that a brown hare was heading. Glorious golden fields brimming with a magnificent cast of barley, their millions of ears swaying as one in the wind, first this way, then that – creating an effortless spectacle of ever-changing colour and sound.

In the distance the land meets the sea, as waves gently lap the golden sands and join in the rhythmic chorus of sound, the soothing whooshing rhythm of the sea and the land.

Above this orchestra of nature Norfolk’s big blue sky, with a pair of buzzards effortlessly circling in the thermals as if conducting the performers below.

This is his stage, his favourite place – the place he comes to celebrate, and out of the field margins, he comes – the hare they call Jigfoot.

His long ears upright, his shining brown and black eyes glisten in the sun but aware of all that is around him. He emerges from the rich green field margins with a somewhat cumbersome, awkward gait.

The field margin displays an abundant richness of colour; the pink and white of the campion, vivid yellows of oxe eye daisy and birds foot trefoil and deep purple of thistles.

As well as bringing colour these plants bring life, buzzing as they do with myriad insects from hover flies, bumble bees, honey bees, moths and butterflies and in turn they add to nature’s orchestral performance, adding as it were the brass section to the background rhythm of barley and waves.

A flurry in the hedgerows sees a flock of field fare arrive, always flitting as if they are too late, no time to stop, but they skirt along the hedge chirping to complete the score – the stage is ready for Jigfoot now.

By now he has made his way to a clearing – his orchestra in full tune, and then, as the sun breaks through the cloud – the rays of light from the sky reach down from above as if to embrace a loved one.

A flock of sparrows arrive on queue with their shrill chorus upping the tempo and Jigfoot responds…. His foot changing the rhythm and going ever faster..tip, tip, tap, tap, tip, tip, tap, tap.

As the pace increases and his shiny brown fur starts to ripple with the movement of his muscles.

Tip, tip, tip, tap, tap, tap …. Faster and faster – a smile fills his face; his fur is rippling, his muscles trembling, his heart pacing until he can contain himself no more – and so he leaps high up in to the sky.

His body is alive, no longer does he walk awkwardly on four legs he his jumping this way, that way, up, down, left, right – he is dancing with unbridled joy – this is Jigoot he who dances to celebrate all that is around him.