Old Ale – New Beer for December.. …plus we’ve been mashing it up again 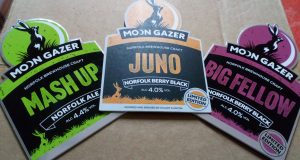 Well it wouldn’t be Christmas if we didn’t have some new beers to tempt you with.

Now, while our winter offerings of Moon Gazer Triskele (porter) and Hiberno (copper amber) are really hitting the spot we thought we had time to squeeze in two new brews.

First up we have an old ale style with a new twist.

We have Anton and Stuart, of the Kings Head Bawburgh, to thank for this particular creation. They had very kindly bid at a Norwich Inns charity auction for a brew day up at Moon Gazer barn, and not only did they get to choose the style of beer that they would like.

When chatting this over with Stuart he commented that he had enjoyed a fine pint of Adnams Old Ale, but also that he was generally a fan of the darker beers. He was also looking for a bit of a twist, but something which wasn’t too far out there and would be appreciated by a broad range of drinkers. As such it also needed to be a modest abv – so 4% seemed to hit the spot.

Now, we too appreciate the old ale style of beer. Complex, malty, nice and smooth with light bitterness but a good depth of flavour.

As for the twist we felt the addition of blackberry would complement the darker malts whilst giving a suggestion of fruit without detracting from the fact that it’s a sessionable ale. So, don’t expect a Belgian fruit beer but do expect a complex ale with a hint of blackberry which still allows the complex biscuit, chocolate and liquorice flavours of the chocolate, oats, Cara special and brown malts to take a starring role. The backbone malt flavour comes courtesy of a blend of Norfolk Maris Otter and Chevalier malt – always a winning combination in our view.
Colour wise the clue is in the description – berry black – a dark purply brown old ale – hopefully not too dissimilar to the colour of a blackberry!

As for the hops, the beer is fairly lightly hopped in the Old Ale style, but using modern varieties. First there is the American Azzacca hop – think mango, pine and citrus – along with its American stable mate Crystal for a hint of lime.

The black berry was added in two stages, some in the fermenter and then an additional top in cask to add some flavour during the secondary fermentation. We like it – Old skool maybe but with a good nod to the tastes of today.

But back to Anton and Stuart – as it was a brew inspired by them they also got to get a special edition, which is exclusive to the King’s Head, Bawburgh and is named Juno after a beloved black Labrador.

The remainder of the brew can be enjoyed across Norfolk where you will look out for Moon Gazer Big Fellow.

As for the all new Mash Up – well you should all know the routine by now. Once the dry store starts looking untidy with part used bags of malt and hops then its time to mash them all up and see what comes out.

This time you are in for a red ale treat – as 9 malts blend together with 6 hops from the UK, Europe and USA.
Not a red IPA, more of a session IPA – something to be enjoyed by a roaring fire in the winter months.

But get it quick as with all out Mash Up brews they are unique and when they are gone they are one – never to be repeated.