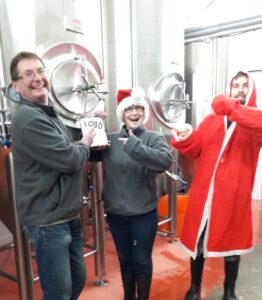 Now, in fairness this day should have been with us a lot sooner – as had the pesky virus not hit then a special summer brew would have marked the celebrations. As it happened the brew schedule had to be planned around what was needed and it turned out to be the turn of DewHopper lager to take the accolade of this milestone brew.

That’s apt enough – as way back in 2012 when we first started to brew Moon Gazer ales, lager was always part of our plans – with StubbleStag the second brew which we did. Its also appropriate in a sense that DewHopper is the most awarded beer in our portfolio – scooping a whole host of local, regional and national golds and silvers. Something which the team are immensely proud of.

We will be making sure that brew 1001 and 1003 are extra special brews as we brew up some beers which we will age for 3 months – a modern barley wine and a white blonde both weighing in at 7.5% abv and marking the next sage of Moon Gazer’s little journey in the world of beer and hopefully on towards brew 2000.

So, as we reflect on the first 1000 it’s been a memorable journey. Our intention was never to achieve global domination – no, for us it was always all about taking our fair share of Norfolk and East Anglia, earning the respect of customers and drinkers alike by bringing solid reliable beers that bring pleasure. Get that bit right first and then see what happens next.

Thankfully we can tick those boxes, but it’s an ongoing quest – we have a saying at Brewhouse Madhouse “you’re only as good as your last pint” and so we are constantly looking to be at the top of our game.

We have a small team, but one which we know shares our passion and desire to continue the journey and spread the reputation of Moon Gazer.

Rest assured that your favourite Moon Gazer brews will still be around – and a little tinkering around the edges will move them to greater heights. We will also be looking to keep up the guest and special brew programme which has been our hallmark over the last few years.

Selecting from this back catalogue of specials we will be making some of our personal favourites more frequent features on the bars – Ostara being one of the golden beers which you really took a liking to. Bob’s Tale – a great beer which we brewed with and to celebrate the life of Grandad Moon Gazer will be getting beefed up from 4.5% to 7.5% as one of our new aged-beer collection.

Other highlights along the way have been the charity beers which we have brewed for our chosen charity Its On the Ball. Brews of Fred’s Check have helped raise awareness of testicular cancer across Norfolk and also reminds us that beer and pubs are a power for good, and that the importance of using what you do to give something back is also a big part of what gets us up in the morning.

So, as we kick on with the next 1,000 brews can we pass on a massive and sincere thanks to our customers, our friends and all those of you who have learnt the art of how to stop staring and start gazing.

Thanks for your support, your appreciation and for sharing in what we do. It’s all about you guys without who it wouldn’t be the journey that it is.