600 not out…and still mashing it up 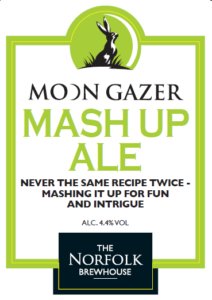 Time flies and it seems like only yesterday that we were celebrating our 500th brew here at Brewhouse madhouse. But, next week we’re reaching our 600th brew milestone. In beery terms that’s just short of 2,000,000 pints.

Now that we are brewing four times a week, these milestones will come around a lot quicker than the scary early days when we were thrilled – and often totally panicked – when we managed to brew more than once a week.

But, a milestone is a milestone and we intend celebrating each and every one of them, so we will be once again mashing it up with an all new Mash Up ale for our 600th brew.

This time you will be pleased to know we had quite a lot of light coloured malts left over in the cupboard, so it will be our first ever Golden mash up.

Now, for those of you in the know, and Mash Up does have a bit of a cult following.

Introduced 18 months ago our Mash Up ales are never the same recipe twice. They are the brewery equivalent of bubble and squeak, where part opened bags of hops, malts and other interesting ingredients need to be put to good use. OK and also often when Mrs Moon Gazer wants us boys to have a bit of a tidy up.

So, our celebratory brew which will be arriving in pubs across Norfolk from around the 20th August will be a robustly hopped beer – but smooth on the finish. We have some French, American and fab UK hops to chuck in the mix along with more than just a sprinkling of citrus peel of oranges and lemons.

At 4.4% it the beer can’t carry the hop character of a stronger IPA but it will be a lush, smooth drinking golden ale worthy of the celebration it is brewed for.

Reflecting for a moment, it is with great pride that we have got this far on what has been a journey of discovery and hard work.

Slow and steady has been our style, taking one step at a time and always reminding ourselves that you’re only ever as good as your last pint.

As we’ve said before, not for us was the brash, loud ‘look at me look at me approach’ – we always wanted to leave that to those younger and frankly noisier than us. In return most of them looked at us with a wry grin in full expectation we were on the road to nowhere.

But, we never were – we just go about things quietly and do our bit to fly the flag for Norfolk.

Along the way I am pleased to say we have and continue to pick up an ever-expanding array of awards but more importantly customers who like drinking our beer and also like dealing with us.

Tough work, but rewarding and as ever boy does it help if you have the backing of a great team and a Mrs Moon Gazer!