A beer which speaks volumes – our new CELLARbration ale 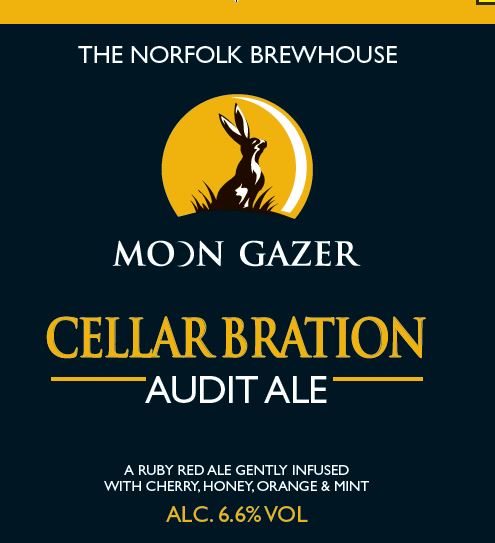 A collaboration brew between Melissa Cole and The Norfolk Brewhouse has the honour of been beer number 50 of the Maris Otter 50 – a celebration beer festival commemorating the 50th anniversary of Maris Otter.

With so much written about Maris Otter over the years it seemed only appropriate that a beer writer be invited to create a beer for the festival.

The festival organisers were delighted when beer-lover, sommelier and writer of world-renown – Melissa Cole – offered to help create a brew.

Melissa was given an open brief, with only one rule – that the base malted barley had to be Maris Otter.

The starting point was to agree on a beer style. It was decided to brew an audit ale.

This little known style is said to be borne out of the strong, darker ales drunk at Cambridge University during the feasts held on the annual audit of university accounts – a tradition said to date from at least the mid fourteenth century, and lasting well into the twentieth century.

This style seemed an appropriate link to Cambridge the ‘birthplace’ of Maris Otter.

So, with Maris Otter as the base malt, Crystal 400 and Chocolate malts were specified to add a deep ruby-red hue to the beer as well as some complex flavours – with a target abv of 6.6%.

Next came the additional ingredients.

Melissa wanted to give the ale some complex fruit flavours – not so much a fruit beer but an ale with overtones of fruit. Fresh cherries would provide the dominant fruit flavour – and add a touch more redness. Orange also plays a supporting role with the use of two types of orange peel – bitter curacao and sweet orange.

Some local provenance was also wanted and so a healthy dose of Norfolk honey was added, and for good measure some Norfolk mint was also used at the end of the boil.

The hops were selected so as not to dominate the subtle fruit and honey flavours, with Pilgrim used as the bittering hop as well as some for aroma, but with the bulk of the aroma hop used been Goldings.

The choice of yeast was also important with a Belgian Abbaye strain selected to be robust enough for the high strength of the beer and to allow the fruit aromas to develop.

As for the brewing itself Melissa visited was a welcome visitor to The Norfolk Brewhouse and we were thrilled to brew alongside Melissa at our 10 barrel brew plant – obviously preceded by taking in a good dose of Norfolk hospitality the night before.

Make no mistake Melissa was hands on in the brew; loading grain, counting hops,sorting cherries and tweaking quantities as the brew developed. In fact donning her Wonder Woman socks

and brand new bright yellow wellies Melissa was a very welcome addition to the brew team for the day.

So how did the beer turn out?

Well, do try it and let us know.

Sincere thanks to Melissa for creating the beer and for being such fun on the brew day.

Moon Gazer CELLARbration ale will debut at Maris Otter 50 – Open, Norwich Sept 17-19 alongside 49 other new brews from around the country and indeed the world.

To find out more and for tickets: https://ueatickets.ticketabc.com/events/simplesearch/maris/