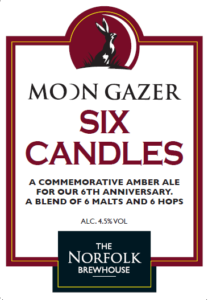 Another year nearly over at Brewhouse madhouse and another chance to celebrate our birthday with a new beer – well we don’t need much of an excuse.

Those of you that have been following team Moon Gazer for a while may have well supped a pint or two of our 5th anniversary brew – Five Candles. In an effort of will and creativity bordering on the superhuman we have come up with a new name for this year’s brew – Six Candles.

Last year’s brew proved really popular and the one-off brew was brewed three times as we stretched our birthday celebrations across the whole month! The only downside was the plethora of Ronnie Barker impressionists approaching the bar. Admittedly some were passable but most need a bit of fine tuning so you have time for a bit of practice.

So, to our sixth birthday brew, as with last year this brew will take the number of years we have been going as the recipe theme – so we will include 6 different malts and 6 hops.

The result will be a powerful malty beer with great depth in flavour, sultana fruitiness with balanced apparent and appealing hops.

Dark copper/amber in colour at 4.5% abv it will be a smooth, easy drinking, moreish session beer.

The six malts which we have used are Maris Otter pale, Caramalt, Crystal 150, Chocolate malt, Wheat and a bit Dextrin.

As for the hops we will be using some sturdy British hops for the bitterness with our old favourites Challenger and Goldings while Celia, Bobek, Cascade and Amarillo taking up the role of aroma and flavour.

The brew will be heading out to pubs on 31st January – so, do please look out for it and enjoy. Without you beer lovers we wouldn’t have made it to 6, and hopefully there are a lot more to come yet.