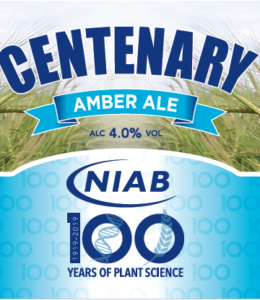 Team Moon Gazer are thrilled to have brewed a special ale celebrating the 100th anniversary of NIAB – The National Institute of Agricultural Botany which was founded in 1919.

It is the mission of NIAB to provide independent science-based research and information to support, develop and promote agriculture and horticulture.

As a major international centre for plant science, crop evaluation and agronomy, NIAB still carries out the statutory crop inspection and seed testing for all cereal varieties, including barley, making sure varieties are true to type and healthy.

Of particular interest to us is the involvement that the organisation has had with our favourite barley – Maris Otter. Indeed, in 2004 it was NIAB who took on the task of ‘cleaning up’ the Maris Otter for our good mates at seed merchants H Banham Ltd.

So, when asked to create a beer to celebrate their centenary we were also keen to showcase Maris Otter and NIAB’s involvement in it.

It will come as no surprise therefore to learn that the beer is made predominantly of Maris Otter pale ale to give it that signature biscuit, malt notes – with just a touch of Crystal 400 and Chocolate malt added to create a beer of a rich amber colour.

As for the hops we wanted to create a beer using a home grown hop as we are celebrating a British institution.

We were also looking for something which was new and exciting as that would add to the concept of the importance of crop development.

Chatting to our hop merchants Charles Faram they recommended the Mystic hop variety. This new variety is the daughter of the very popular Jester hop, and will give the beer a rich fruitiness with blackcurrant, citrus and passionfruit characteristics.

Although big on flavour the hops will balance nicely and lead to a good traditional bitter – a fitting tribute to the work of such a great institution.

It’s a limited-edition brew and one we are very pleased to have been involved in.
Do please check out the work that they do: https://www.niab.com/