A Champion revival as Norfolk brews up a bit of Suffolk 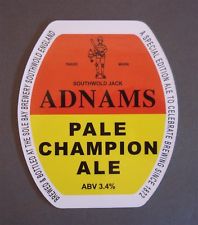 As part of our celebrations of Maris Otter at February’s Great British Beer Festival (Winter) we are delighted that once again, Adnams of Southwold, and Head Brewer Fergus Fitzgerald allowed us to delve into their archives and dig out a brew sheet to resurrect a former champion ale.

The Norfolk barley as a variety has survived over 50 years and is a real global success story.

Last year, as part of the same project, we brewed up the Adnams Extra Special Bitter (ESB) recipe which received much acclaim. To be fair it was a beautifully simple, well balanced beer.

So, as I headed down to Southwold, on a very cold morning, the task was not as simple as you may think.

The archives are all in the process of being digitally archived, so task one was for me and Adnams brewer Ed Razzal to wade through piles of leather-bound journals to find brew sheets from between 1968 – 1970. (Maris Otter was first grown in 1965 so we wanted one of the earlier recipes if we could find one).

Bingo, once found we opened a treasure troth of brewing history.

However, with handwriting more akin to a doctor’s prescription and weights and measures which were beyond even my relatively senior years there was a fair degree of deciphering which we needed to do first.

We ended up plumping for a recipe for their Pale Champion Ale. This multi-award-winning ale was actually the forerunner to what is now Adnams Lighthouse – a light amber pale ale with a good dosing of British hops; Fuggles and Goldings and a low alcohol level of 3.4%.

Now, whilst I can’t comment on how the original recipe has evolved over the year’s – as I have no idea – suffice to say I was once again struck by the simplicity and balance of the recipe.

I was also taken by the fact that the actual farmer’s names were studiously entered into the journal. Provenance and traceability are values which we all make great store by nowadays but clearly something Adnams took pride in 50 years ago too, and probably well before that too.

But, back to the recipe. It would indeed make a great show case of Maris Otter as that was the only malt present, save for a touch of acidulated malt, and with the amber hue likely to come from the touch of invert sugar which was also used. I say this as Maris Pale ale on its own would result in a rich golden beer.

The hops remain the same as this beer’s contemporary offspring but I suspect that the balance and timing of their additions has changed over the years as tastes evolve.

It’s a great honour to be entrusted with the recipe and I guess the proof will be in the tasting and we aim to do those who brewed this version in 1970 proud. By the way if you’re reading this and think – that was me I brewed there in the 70s do get in touch!

The support of Fergus and Adnams in giving us permission is very much appreciated, and demonstrates just what a great spirit exists with the brewing community to be involved in projects like this and working together.

The Beer Festival takes place at The Halls, Norwich February 19 – 23, do come along and have a taste.