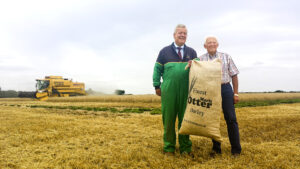 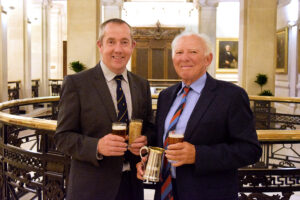 Of all the special ales and collaborations which we have brewed over the last 10 years at Moon Gazer – brewing Tony’s Tribute will be one of the most rewarding and poignant.

The team here at Moon Gazer are very fortunate to have known Tony – and be inspired by his passion for barley, beer and his Norfolk heritage – and specifically his role in saving the Maris Otter barley variety.

We are also lucky enough to call him a friend of the brewery and know him for the true gent that he was – and also to call his son Mark a dear friend. Indeed we teamed up with Tony and the H Banham team to promote Maris Otter with a brewery bar at three CAMRA Winter Beer Festivals and even raised a glass of Moon Gazer with him at Parliament.

It was Tony and Mark’s passion for Maris Otter which inspired us here at Moon Gazer to become unofficial ambassadors, flying the flag for Maris Otter and Norfolk at every possible opportunity.  But we soon discovered we were not alone. You see, when I suggested to Mark I try and get some brewers to celebrate Maris Otter’s 50th birthday by producing a brand new beer for a Maris Otter 50 festival little did I know what the response would be. More than 50 brewers from all over the country jumped at the chance, and beyond that brewers flew in from New Zealand, Spain and America while others sent their special creations from as far away Japan.

So, we are glad to be brewing up a Tribute Ale alongside H Banham, Crisp Malting and Barsham Brewery in his honour.

This barley variety is special and much beloved by brewers the world over – and that is owed to Tony.

Tony’s involvement with Maris Otter stretches back to 1965 when he was 24 and started trading this brand-new barley variety for the family business of H Banham Ltd, in Hempton. The variety had been developed by Dr G Bell at the British Plant Breeding Institute.

Maris Otter was in high demand, however, during the 80s its popularity waned as many of the larger brewers sort new varieties in the name of progress, efficiency and cost cutting!

However, smaller craft brewers – run by brewers not accountants – demanded the brewing properties and taste profile they could get from dear old Maris Otter, and Tony had the vision to see this. So, in 1992, he worked with grain merchant Robin Appel and Gowlett Grain, to obtain the growing rights from the Plant Breeding Institute (PBI).

The variety lived to fight another day, and much work went into the cleaning of the seed stock to remove impurities and improve yield and quality and craft brewers loved the result which saw demand increase.

Now, if this success seems small fry, please consider that most barley varieties will survive just 6-7 years before they are superseded in the name of ‘progress’ .

Maris Otter is the elder statesman of barley and is heading well into its 7th decade with no sign of that popularity dropping off.

Enjoy a Champion Beer of Britain and the chances are that it has been brewed with Maris Otter as it has taken that crown for around 85% of Champions – now that’s no fluke.  Nor is the fact the brewers in over 20 countries demand Maris Otter – much of which is Norfolk grown and malted to produce their beers, all thanks to Tony’s vision.

So, with Tony’s sad passing last month we could not let his contribution go unmarked.

Another local brewery – Barsham, as well as our local maltings – Crisp maltings – had the same view and we all agreed to brew together to create an ale to showcase Maris Otter and also pay tribute to Tony in the best way we know how.

The Barsham Estate is a long-time grower of Maris Otter – and farms close to Tony’s Hempton base, and we were delighted to be able yo use their barley and be joined by their brewer to create the recipe and brew the beer.

To be fair, the malt aspect of the recipe creation didn’t take too long as the decision was taken to make the beer out of 100% Maris Otter barley, floor malted in the traditional way by Crisp Maltings.

This way you can taste the true Maris impact – a distinctive biscuit malt backbone of so many champion beers and countless beers across the world. Uncluttered by any coloured malts the beer will be a pure Maris Otter golden.

So, then we turned to the hops – but, how best to compliment this elder statesman of malted barley – this British institution?

We decided on a revitalised British hop Ernest – itself cast aside in the late 60s-70s as bigger brewers sort cheaper alternatives – only to be revived by hop merchant Charles Faram to great effect, and now gaining popularity for its “New World” characteristics producing a complex flavour with predominantly fruity notes, especially apricot, citrus and spice.

So, there you have it – a fitting tribute to Tony – and one which we will gladly raise a glass to.

Hopefully, you will join us in pubs across Norfolk to raise a glass. The ale will be available from 14th March – but thanks to Tony you will be able to enjoy beers crafted with Maris Otter for decades to come.

Cheers Tony – you will be missed.

MEMORIAL SERVICE  A service to celebrate the life of Tony will be held at 11 a.m. on Tuesday, March 8th, at St. Peter and St. Paul’s Church, Fakenham. (Additional parking available on Beck’s Meadow, NR21 9TD).