A French friendship is brewing… 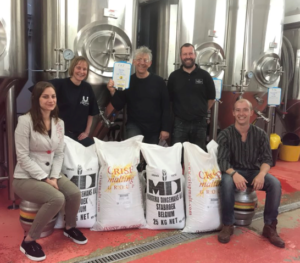 Well, I’m pleased to say that our City of Ale collaboration with French brewers Northmaen is in the fermenter and smelling lovely – all ready for its launch at City of Ale on May 24th.

We were thrilled this week to welcome Dominque, Simon and Marie over from Rouen to help brew the beer.

Mind you it wasn’t without incident, I managed to lose them twice, and their debut on Radio Norfolk involved waving politely to Wally Webb in the car as he left. Glad to say I stepped in for them for the interview and tried to put a slight French accent on my usual Norfolk twang.

I also took the blame for their late arrival, as I only told them of the need to be up at 5.30am for the interview after they had enjoyed a few British pints.

But, the most important thing is that they arrived safely at the brewery with their home-grown barley in their boot which we used to blend with our own Norfolk Maris Otter malt to craft an ale which will genuinely reflect the character of both areas.

If you’re not familiar with how this brew came about, here’s a quick reminder.

The cities of Norwich and Rouen have been twinned since 1959 and there exists a genuine bond between the two, so the collaboration brew is appropriately called Amitié – French for friendship.

Finding the right brewer was very important to the plan, as I wanted to make the link with the rural and city communities in France in the same way that the City of Ale does with Norwich and Norfolk.

As luck would have it Rouen is home to a city centre craft beer pub – La Taverne de Thor (The pub of Thor) – which is owned by Northmaen Brewery – a farm and brewery based just 20 miles from Rouen.

The icing on the cake, as touched on above, was discovering that Northmaen grow their own barley.

The twinning of the two country’s ingredients continues with the hops – French hops; Mistral, Barbe Rougue and Olicana – join Cascade and Admiral to create a fruity IPA.

The proof will be in the drinking but the guys got the beer looking great – a rich golden colour.

For lovers of our Blonde IPA it won’t be quite as punchy as that as we wanted to let some malt character follow through and also some malt sweetness, but you will get plenty of hop flavours.

We will be welcoming the team from Northmaen back for the City of Ale Festival -which starts 24th May and we are sure that they are going to make lots of friends in Norfolk’s fine city.

Now isn’t that what beer and brewing should all be about? 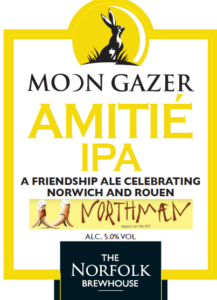 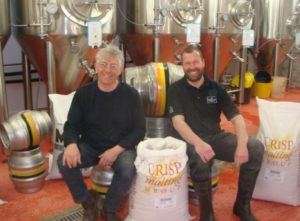