A golden opportunity taken by The Dog 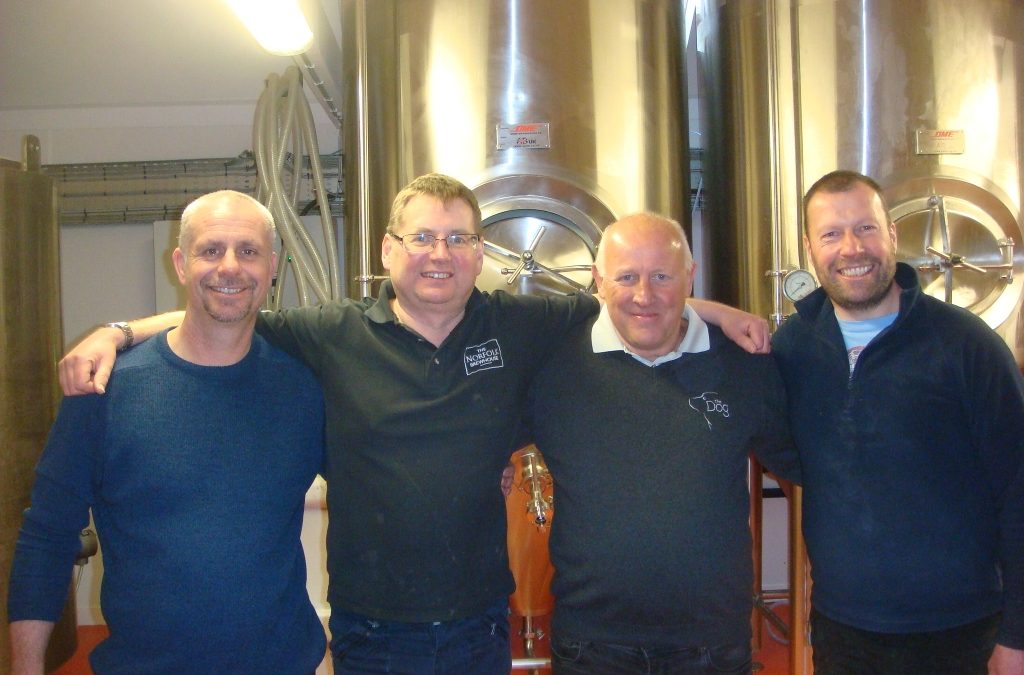 For fans of Tobi’s Tipple, our charity beer which we brew to raise awareness for It’s On The Ball and testicular cancer there’s good news. There’s a new, golden version of Tobi’s out, and it’s all thanks to Lorraine and Geoff Clinch, who run The Dog Inn, in Ludham.

The couple were incredibly generous at a Norwich Inns charity auction and bid to win the right to create the recipe for the new brew, as well as naming the new beer.

The first decision was easy – the type of beer they wanted to brew. They were looking for an easy drinking, golden style beer, with gentle hop aromas and flavours, nothing too ‘out there’ with fruit or other additions – just a good honest golden ale at 4% abv.

Maris Otter malt forms the backbone of the malt taste, but unlike our other golden ales, this time we decided to use the extra pale version of the malt, for a bit more sweetness in the taste.

As for the hops, Geoff wanted a gentle fruitiness so for the bittering hops we used Progress and Mount Hood, while the aroma and late flavour uses a combination of Goldings and Celia hops giving the beer a gentle, zesty fruitiness.

We were delighted that Geoff, and his colleague Mike, were able to join us at the brewery for the brew day and learn about how we brew the beer and our passion for Maris Otter malted barley.

On their visit we were also able to make the second decision about the beer – what to call it.

For this the team at the pub had enlisted the help of their customers who donated money for the charity to select the name of the beer. There were some interesting suggestions to say the least – but the winning entry was picked as Golden Balls as it does what it says on the tin!

The guys at The Dog will be serving their beer on Friday 24th Feb – so do please pop along and try it. They will also be able to enjoy a pint at The National Winter Ales Festival, in Norwich – as the beer was selected to be the charity beer for the festival, and It’s On the Ball the festival’s nominated charity – something which wouldn’t have happened without the help of The Dog.

We can’t thank Lorraine and Geoff enough for their generosity as it will really help the small, dedicated and hardworking team at It’s On The Ball continue their efforts to raise awareness of the risks of testicular cancer, and importantly how it can be cured in 98% of cases if caught in time.

So, you can do your bit too, enjoy a pint and spread the word and do please take a look at the work that they do: http://itsontheball.org/ helping them is easy, just start talking about the disease.

Cheers all and enjoy.