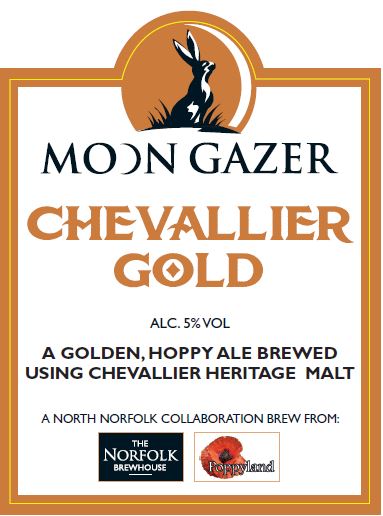 Collaborating on a brew with Martin from Poppyland Brewery is always both an honour and a joy. For the last 3 years we have created a new brew with Martin to launch as part of the City of Ale festival.

Those of you lucky enough to have enjoyed our previous collaborations: Tidal Gold, Norfolk Harvest and HopBean IPA will be aware that we always try something a bit out of the norm, and this year is no different.
It is to be a beer made with ingredients that are quite literally back from the dead.

During a chance beer and chat at the National Winter Ales Festival with Crisp Maltings the subject of Chevallier malt was discussed.

This is a fascinating story of heritage malt, first grown in 1824 – in Suffolk – from grain selected by Dr John Chevallier. The malt went on to become established the world over as one of the leading brewing malts.

However, it was to last be grown commercially in the 1930s. That is until a couple of years ago when, thanks to a collaboration with The John Innis Centre in Norwich and Crisp Maltings, the malt was resurrected.

So, it seemed fitting that a resurrected malt deserved a resurrected hop. Another chance meeting with Paul at hop merchants Charles Faram introduced us to a hop called Ernest which fitted the bill perfectly.

This hop variety was first selected in 1921 and eventually trialled at Wye College in Kent in 1957 and 1958. However, the brewers at the time rejected the variety as been ‘too American’ – aka far too aromatic and tasty for our bland beers!

Oh, how times change but thankfully it is now grown commercially for Charles Faram’s and is admired for its New World flavours. In case you were wondering the name Ernest is after the Professor responsible for the hop – Ernest Salmon.

So, putting the two together seemed to make perfect sense – especially after a pint or two!

The cask version – available throughout The City of Ale – will be a pure blend of the resurrected ingredients, pure and simple – Chevallier Malt and Ernest hops. As such it will be golden in colour. The heritage malt imparts quite a robust, dominant malt flavour and so the beer is to be quite heavily hopped to balance that, as well as suiting the relatively strong abv at 5%.

The bottled version of the collaboration, brewed at Popplyland Brewery, will be slightly stronger at 6% abv and also includes some coloured malts to create a delightfully robust and fruity American Red Ale. Martin was also more daring than I and used a third resurrected ingredient – namely kveik – an ancient strain of Norwegian yeast.

Two beers, born from the same idea, but distinctly different.

Look out for them and enjoy them.