A Hawkey Frolic – a fond farewell 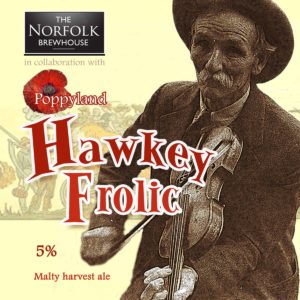 For me, one of the best things about brewing is the opportunity to collaborate and work alongside great people – and the friends that you make along the way.

It has been an absolute privilege that one of those friends I’ve ‘collected’ has been Martin Warren of Poppyland Brewery.

We both started our adventures in brewing about the same time, both with a simple aim of brewing great beer but often in different styles and approaches. Martin has delighted the beer world with his incessant foraging for obscure ingredients and researching of small batch brews where we at Moon Gazer have been a bit more, shall we say – conventional.

Over the years we have done some award-winning collaborations together – 3 times our collaborations were voted best beers at the annual City of Ale Festival. This year we had great fun with our South Island IPA project, each brewing as we did identical recipes, at the same time, with the same ingredients but at our respective breweries. The result was two distinctive IPAs which we proudly served up to a true IPA guru Roger Protz.

Anyway, Martin has decided to hand over the reins of Poppyland to Dave Cornell – another beer enthusiast – as he takes time to follow his other passions, including geology.

However, I couldn’t let him leave without one last collab (well may be one of a series) and was delighted to welcome Martin and Poppyland’s new custodian Dave along to the brewery yesterday to brew up Hawkey Frolic – a 5% abv Harvest Ale.

Now, if that name sounds familiar that’s because Poppyland first brewed this – while being filmed by David Whitely and BBC Inside Out – for the Maris Otter festival in 2015.

That festival was a celebration Maris Otter barley’s 50th year – another Norfolk icon and the king of malt in my humble opinion.

Martin’s original brew was a 7% malty offering showcasing Maris Otter barley, complemented with some crystal malts and Goldings, Aurora and Willamette hops. To add to the degree of difficulty of brewing and also reflect the age of Maris Otter, Martin sourced a yeast from 1958 which he grew on from a culture provided by the National Collection of Yeast Cultures, in Norwich.

As for the name, well that links to the old harvest home celebrations held by East Anglian farmers for their workers on the day that the last cart load of produce was brought ceremonially into the farmyard. Reddish brown in colour with powerful sweet malty flavour balanced by just enough fruity hops.

Fast forward 4 years and Martin’s last cart as it were arrived at Moon Gazer barn to brew with me once again.
The recipe was left pretty much the same in style – but we dropped the abv to 5% , just used Aurora and Willamette hops and – since you know I play it safe – stuck to our usual Norfolk Brewhouse yeast!

So far so good, its bubbling away nicely, and Hawkey Frolic will be arriving in pubs across Norfolk in a week or so’s time.

A fitting celebration to a top bloke, top brewer and someone I am glad to call a friend.

In spending the day chatting to Dave as well I can safely say Poppyland – its ethos and its dedication to great beer are in safe hands, and let’s hope our history of collaboration can continue.

Cheers Martin – thanks for sharing our journey – I look forward to raising a glass of Hawkey with you. 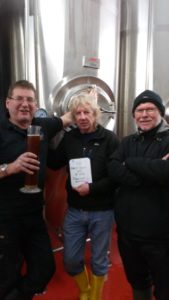 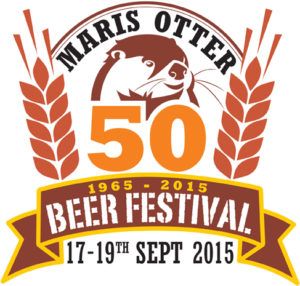