A hoppy distinction – our all new Session IPA 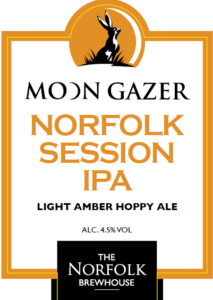 In this era of craft it seems to me that new beer styles are harder to keep up with than Lewis Hamilton on a good day.

Within that there also always seems to be a blurring of lines between styles.

This is often the case when defining Session IPAs – of which there are some truly awesome examples.
However, there are those that say isn’t it just a Pale Ale. Well, in my book know.

Our Blonde IPA has proved very popular – good strength at 5% and clean dry hoppiness with a generous bitter aftertaste.

In short you know you are drinking a pint of hops and that the malt is happy to play second fiddle in the background.

Then take our pale ales – Pacific and Norfolk are our two most popular. Both offer a good hoppiness but with out a great deal of bitterness, flavoursome yes but softer than our IPA.

For us, the Session IPA aims to be distinctive from both an IPA and a Pale Ale – yet at the same time it need to take the best of both.

First off the abv is 4.5% – strong enough to balance the hops but light enough for you to enjoy one or two.
Secondly it will use bolder hops than our Pale Ales – so as to provide a great flavour but also pack a hoppy punch. In this case 4 classic high alpha American hops; Simcoe, Belma, Citra and Mosaic.

We will use very few hops as bittering hops – with most of the hop additions coming within 10 minutes of the boil and more than a generous helping of post boil hops.

The result will be a fruity, hoppy IPA which can be enjoyed by many.

Oh, as for the malt its Norfolk Maris Otter supported by some wheat and some oats.

While we fully expect there will be those that say – it’s not a proper IPA, and those that scream its like a Pale Ale only a bit hoppier – we ask only one thing; enjoy it for what it is.

A limited-edition brew available from 12 September.