A humble brew and a glass half full 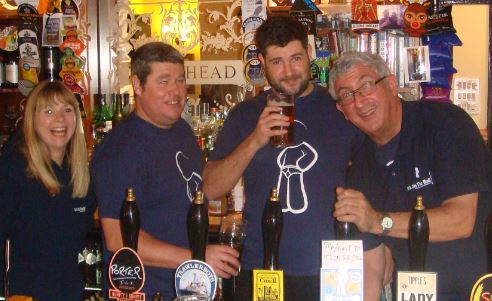 Well, this week saw the official launch of our Tobi’s Tipple Nutchekka brew, and a big thanks to Charlie and the team at The King’s Head, in Magdalen Street for hosting Vince and the It’s On The Ball team.

It’s the third year which we have been proudly involved in the campaign and looks set to be the biggest yet – and by biggest don’t get any grand ideas, we are talking about getting people talking.

That’s objective number one and anything else is a big bonus.

This year, in particular, it really struck home what an amazing team It’s On the Ball are – not just in what they do but in what they symbolize.

You see, the happy go lucky fellas who gladly hold a pint to publicise Tobi’s are all giving of their time and their experience to say thank you and you help prevent others suffering from testicular cancer – they have quite literally been there and done that – but rather than say thanks and move on, they have decided to adopt a ‘we can do so much more than that’ attitude, and they devote their energies into spreading the word about a killer disease yes, but one where 98% of those diagnosed can be cured if only the symptoms are spotted in time.

This small team seek no thanks, no praise – just the simple reward of knowing that for everyone their campaigning helps to diagnose in time then a life has been prolonged or saved. For me, in this increasingly ‘what’s in it for me’ world where networks all too often become cliques and self-interest dominates so many decisions, I find it incredibly humbling.

This humbling impact is even more poignant this year as the same week as we launched our new Nutchekka I am in correspondence with a brave man who is undergoing treatment in London following an earlier diagnosis, and yet always makes me smile and looks to the future – and takes time to focus on those helping him with chemo and pain relief not on his on woes.

So, why do team Moon Gazer get involved with Tobi’s Tipple every year? – well all of the above hopefully answers it – that and the added bonus of us engaging with some other unsung heroes of Norfolk communities – pub owners.

The new brew in the tough month of January hopefully helps them as beer lovers seek out new tastes, but again so many of the pubs get so much more involved in the campaign than that – gladly spreading the word and talking balls!

Today, in the UK, at least 7 blokes will have their lives totally turned upside down as they will be told that they have testicular cancer. Sound terrible, well the same will happen tomorrow and the next day and the day after that…..

If, through drinking a pint of Tobi’s Tipple and getting the pubs talking about it all we achieve is that of those 7 diagnoses at least one is much earlier than it would have been then there is hope.

We hope that you love the beer, not all of you will after all that’s life and that’s beer – but promise us one thing – that you remember the beer for what it is doing and tell at least one mate to check their balls. You see, if you do that then hopefully he will tell another mate who will tell another – and before you know it this killer which no one talks about will be not so scary after all.

Or just share a photo of the pump clip or leaflet on social media – that’ll help too.

A big thanks to the pubs of Norfolk and North Suffolk once again for their support and a big thanks to Vince and the team at It’s On The Ball who always help me remember that that glass is half full.

You can find out more about It’s On the Ball at : http://itsontheball.org/