A matter of taste… as winter ales take their place 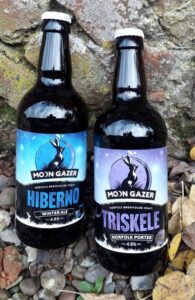 Personally, I have always loved the seasons.

Being of a certain age I can still remember when asparagus signalled the arrival of spring, strawberries the start of summer school holidays and Brussel sprouts – love em or hate em – heralded in Christmas.

Nowadays, with changing agricultural methods and the globalisation of everything, eating by the seasons seems to be well and truly a thing of the past.

I regret that change, and think that we are all poorer for it. Not least because our bodies are programmed to crave food by what’s in natures harvest – so not only are we missing out on just how fantastic the first strawberry of summer tastes we are playing with our genetic make up which has taken millennia to develop.

However, when it comes to beer there still seems to be some retained purity in traditional seasonality – as autumn signals the arrival of a plethora of winter ales and the delights of full bodied, flavoursome beers to savour.

Now, don’t get me wrong, of course you can get dark beers all year round, but brewers will add that little bit extra to create rich, winter beers.

Before I explore the positives of Winter ales, I will fess up to a personal pet hate of mine that tends to accompany them – namely the arrival of the associated array of tacky Santa or Reindeer themed beers where the brewer seems intent on gimmicky sales rather than tempting you with flavour.

Call me old fashioned but I would rather enjoy a beer where the brewer invests more time on the recipe and the ingredients rather than creating a flashing pump clip or seeing just how tenuous they can get at alliteration in their name selection.

No, not for me are the cheesy Ho Ho Ho ales or Rocking Reindeers just give me an honest, complex winter ale.  But, what you may ask is that?

I’m not sure that there are any strict rules – but, I come back to the point about us human’s being pre-programmed to seek out seasonal ingredients – so a plum porter may spring to mind.

However, many winter ales include the traditional spices associated with Christmas; cinnamon, nutmeg, ginger for example, as well as dried fruits such as orange or lemon. Typically, these very expensive ingredients were the regular delight for only the wealthy while most folk could afford them only for celebrations such as Christmas.  So, over time they would become known as the Christmas spices.

Brewers sought to replicate this practice and crafted indulgent, special seasonal beers to be the preserve of winter, created to be warming, complex and that little bit special – after all it is Christmas!

By way of example the two winter brews which we create at Moon Gazer have layers of complexity.

The Triskele Winter Porter is traditional in the sense it is dark, complex as it uses 6 different malts, (including a smoked barley from Germany to add a real depth of flavour) and follows the Christmas spice ‘rule’ with the inclusion of orange peel and coriander. For once, although the fine Goldings hop is used to add flavour and bitterness, the hop’s role is not to dominate, but instead to allow the spices and malts to take centre stage. It’s definitely a beer but it has qualities of a rich red wine and for me is just perfect with a slice of Norfolk Binham Blue.

Another top cooking tip for Triskele – or indeed any other dark winter ale – is to soak your bacon in it overnight, sprinkle on some brown sugar and then cook in the morning as normal. Trust me you will never taste bacon like it!

Our other winter offering – Hiberno – also includes spices and orange peel but is more copper in colour, perhaps reflecting a move away from the dark side.

So, this year do explore the array of winter ales out there for you to discover, but remember their history is to be special and indulgent. As such, do please select the beer on its ingredients and not simply the creation of a frantic marketing guru who worked so desperately hard to think of a novel way to get Santa into the name!

Winter beers, there to savour.