A modern twist for an old ale… 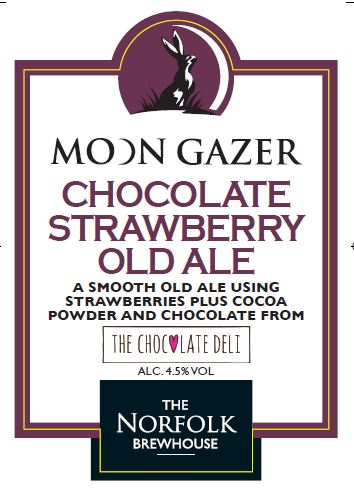 The mere mention of an Old Ale and you conjure up images of log fires in pubs and rich dark beers.

While you wouldn’t be wrong, Old Ale is a beer style which actually has many guises, yes typically dark, and more often than not on the stronger side – say 5% and above – sometimes much stronger than that even.

However, it’s a fairly loose definition and we were keen for our very first Old Ale to pay tribute to the old style but bring a modern twist. OK, that’s brewers jargon for we wanted to play about a bit and have some fun with it!

So, the staring pint was something dark, sweet and fruity.

Well, the dark bit was easy as we are adding some chocolate malt and roast barley to the Maris Otter base. This malt blend will create a beer which is dark red in colour with malty chocolate, liquorice flavours at the fore.
Adding chocolate to the brew – once again supplied by local chocolate guru The Chocolate Deli – not only adds a rich smoothness but it imparts a smooth, rich dynamic to the beer. As with our chocolate orange stout from earlier in the year we are using a fine natural cacao powder from the Sambirano organic rainforest plantation in Madagascar. Trust me it’s very difficult not to dip the finger in the chocolate when weighing it out!
The result will be a mouthfeel which will be smooth, rich with a velvet-like texture.

Hopping will be subtle to allow the strawberry, chocolate, liquorice flavours come to the forefront.
Goldings and Challenger will provide the bittering, while a blend of Slovenian Celia and Bobek will provide the hop aroma.

As for the strawberry well we are using a healthy amount of strawberries which we pureed and kept over from the summer. These will bring a complimentary fruit aroma to the malt and sweetness.

Strength wise we are going a little bit lower than what’s traditional – weighing in at a manageable 4.5% abv.

So, there you have it – doffing our brewing cap to the great beers of the past while adding a thoroughly modern twist.

Look out for it in pubs from 30th October.