A new beer with a surprising heritage 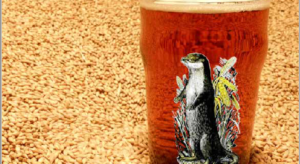 As part of our Maris Otter bar at the Great British Beer Festival Winter – we have teamed up with Muntons Malt, of Stowmarket, in Suffolk to craft a new Red Ale – aptly named Copper Otter.

Teaming up with Muntons is important to us as they play a key part of malting in the region but also have a unique position in that they despatch over 90,000 tonnes* of malt and produce some 30,000 tonnes of malt extract every year. In addition, they also produce some fabulous home brew kits for brewers from across the country and world.

So, not only do they support brewers by supplying malted barley, their other two areas of business provide an insight into how malt is used throughout the food and beverage industry.

You see, we brewers use malt not just for flavour and colour but it is the source of the much-needed sugar which the yeast will ultimately turn into alcohol.

Not surprising then that other food producers see the benefit and also use malt extract to flavour, colour and sweeten their product. You may not know it but many of these will be household names – think Maltesers, Horlicks, Weetabix to name but a few – the chances are these will contain East Anglian grown barley, malted and crafted into extract by Muntons.

The same principle applies to the malt extract used in homebrew kits. These days with new techniques, improved raw materials and all malt recipes, modern kits have come on in leaps and bounds offering excellent flavour notes, colours, aromas.

Muntons are passionate about homebrew and have been making beer kits for over forty years –
ranging from heavy stouts, light pale ales and delicate pilsners, providing complex flavours and notes that would now give any palate a true taste sensation.

So, with all this passion about Maris Otter – let’s get back to the Muntons brew for the Great British Beer Festival.

Created by their in-house brewer and brewing technologist this red ale promises to be an easy drinking ale, with spice, fruity notes delivered from the single hop Chinook.

Maris Otter forms the bulk of the grain recipe but complex flavours and mouthfeel are added by also using it alongside wheat, lager malt and dark crystal rye.

A big thanks to Fabian and the team for creating the recipe for us.

See you at the festival to enjoy a pint.

*Muntons Stowmarket Maltings despatch over 90,000. Just over 200,000 was despatched across both maltings (Bridlington and Stowmarket) 2017.