A new companion for spring… 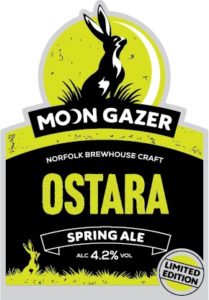 Our new ale – Moon Gazer Ostara – will capture the essence of spring welcoming in a golden new age, and also doff its hat to the resurrection links to Easter as well. If that’s all a bit twee for you, just relax in the knowledge that it’s a great new addition to our range.

The beer will be heading out to pubs from the 4th April, so do please look out for it and enjoy.