A proudly Norfolk ale for all to enjoy… 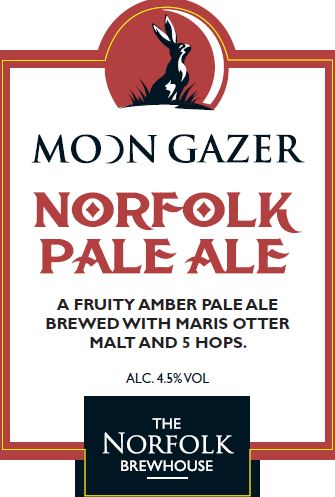 Now, any one that knows us here at The Norfolk Brewhouse will know all too well that we have a passion for promoting all things Norfolk – after all – you could say that the clue is in our name.

As a county Norfolk is home to some of the finest malting barley growers and maltsters in the country, and that indeed is part of the inspiration behind the launch of our latest beer; Moon Gazer Norfolk Pale Ale, a 4.5% abv amber coloured ale.

I use the words ‘part of’ advisedly, as there was another telling moment which made me get off my backside and produce a beer to champion our fine county. That moment was late afternoon on a rather wet and windy day in Wells next to Sea as I stepped in doing deliveries for the day.

During one of the said deliveries a rather portly, well-dressed, well-mannered gentlemen in very striking pink trousers chirped merrily to his pal as he approached the bar “ Oh, fantastic they have Ghost Ship, that’s a great local ale in Norfolk.”

Now, I concur, Ghost Ship is indeed a fine ale, and I’m a big fan of Fergus the brewing guru at Adnams, but last time I checked on Google, Southwold is in Suffolk, and some 70 plus miles away from where I was standing at the time, passing a good number of excellent breweries en route.

So, while it might be ‘local’ when compared to brewers in Essex or Buckinghamshire – it ain’t exactly on the doorstep.

So, that was it – time for us at Moon Gazer in our own little way to reinforce our Norfolk localness.

After a polite, but, I confess, very slightly sarcastic quip to the chap – now enjoying his pint – which went like this: “Yep, a great pint indeed sir, but do try some from Norfolk if you like local ale!” – I trotted off to the van vowing to not buy pink trousers and to create a new ale which would proudly carry the word Norfolk.

The plan was not to emulate Ghost Ship, but I guess the story led me to consider that part of that particular beer’s success was down to it hitting the spot, in terms of its style and profile, not too light, not too dark, plenty of fruitiness yet more accessible than other hop forward beers.

In short, I wanted a no nonsense, solid, amber ale which embraced some exciting, aromatic and fruity hops. The timing also came off the back of our Five Candles birthday ale which had been a great success, but at 5%, was perhaps a wee bit too strong for some.

Brewer Bruce was left to fill in the blanks and craft the ale recipe – using Maris Otter barley (malted at Norfolk’s Crisp Maltings) as the base, with a hint of Crystal rye for colour and some toffee, liquorice complexity and some Caramalt adding mouthfeel.

As for the hops – that fruitiness we are after in the form of mandarin, lime zest, tropical fruits comes for a combination of Columbus, Cascade and Simcoe from the USA, and Wai-iti, Rakau and Motueka from New Zealand. Mix it up, mash it up and see what it comes out like…

Hopefully, folk in all counties will enjoy it – even the good folk of Southwold – but rest assured when they drink it and read the pump clip there will be no confusion where it comes from – Norfolk and proudly so.