A shared passion – we welcome Mike to Team Moon Gazer 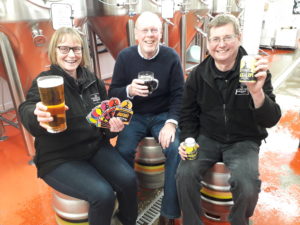 Exciting news as we are looking forward to the next stage of our journey as Team Moon Gazer is joined by one of Norfolk’s most noted and experienced beer professionals.

Mike Bett’s, who was formerly a co-owner and director of Woodforde’s Brewery – until he sold the business in 2016 – has joined The Norfolk Brewhouse.

Since selling Woodforde’s Mike’s passion for beer and the county of Norfolk has never waned and after a chance meeting with Rachel – unsurprisingly at a beer festival – he has invested in the business and joined the team – as Mike explains:

“It was with a heavy heart that I left Woodforde’s – I had a truly fabulous twenty years there, and was so proud in what the team had achieved in terms of helping to put Norfolk and its beer on the map.

“In watching what Rachel and David were doing with their Moon Gazer range of beers I could see that same passion for both beer and county.

“I was so struck, that I quipped that if ever they sold shares, they should let me know. Here we are, a few months later and I am thrilled to have invested in a very special team.”

We have spent much of the last year carefully investing in staff and equipment to help us meet demand and increase production capacity up to 15,000 pints a week, with scope to develop that further.

As part of that expansion we are having a completely new look – with more emphasis on Moon Gazer with each of the beers taking on its own name for a hare – of which there are many from across the centuries.

This will see such names as Jigfoot, Jumper and Nibbler replacing the existing brew names of Golden, Amber and Ruby, and we are enthused by how their other existing hare named beers DewHopper and StubbleStag have been received.

The re-branding and re-launch will also see Team Moon Gazer team make our first entry into the growing market for craft canned beer, but with something a bit different. Well you wouldn’t expect us to do otherwise now would you.

The new beer will be a ginger lager called Jackalope (named after the mythical creature part here part antelope).
We did brew it once before – way back in 2013 – but have never been able to fit it in since, as it has to mature in tank for several weeks to allow the flavours to develop. We have been able to do that now by investing into more brewing capacity.

That continued development and investment has been helped with the backing of a Leader Grant which has helped fund 40% of new equipment including a cask washer and additional fermentation capacity.

This funding is from the European Agricultural Fund for Rural Development (EAFRD) delivered via Defra, with the overarching aim of the programme to contribute towards improving the environment and the quality of life in rural areas, and strengthen the rural economy, by helping micro and small businesses to create and sustain employment within the area.

These are exciting times for Moon Gazer – we have always adopted a quality-first approach to our growth – and its always important to us that growth is sustainable. The grant allows us to do that, and now we have added Mike’s considerable expertise and boundless enthusiasm we are looking forward to the next chapter in the our story.

The new look beers and names will be launched from 21 March – the next Full Moon!

Get ready to STOP STARING…START GAZING