A special 50th birthday party, with a touch of Monty Python 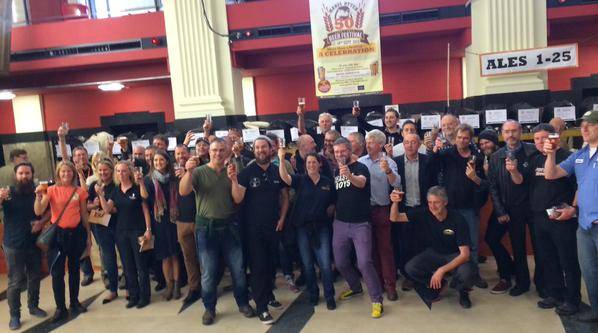 Beer legend Roger Protz set the mood at the opening of the Maris Otter 50 Beer Festival, in Norwich, last week, when he introduced the festival by saying there was something ‘very Monty Python about having a birthday party for malted barley’.

However, it soon became very apparent to all those in attendance, (which included leading botanists, agronomists, farmers, growers, seed merchants, maltsters and brewers) that this particular malted barley – Maris Otter – had indeed earned the right for a damn good party involving a veritable who’s who of the brewing world.

We had been very fortunate, and proud, to co-organise the party with Mark from H Banham Ltd, the Norfolk agricultural merchant who is the guardian of the Maris Otter gene. Little could we have imagined a year ago, when the idea of the festival was born, that one year on we would be stood amongst such illustrious company all raising a glass to a grain! Pythonesque maybe but this is no dead, deceased, ‘restin’, stunned malt – Maris Otter is very much alive and looking forward to its next 50 years.

What made this festival remarkable for us, was the passion and enthusiasm which it engendered amongst the 50 brewers who all crafted a new beer for the party. And what a feast they laid on for us all to enjoy, highlighting just why Maris Otter is the backbone of so many great beers – including 11 out of the last 15 Champion Beers of Britain.

There was a golden mild, a mustard sour, a raspberry barley wine – just about every style of beer you can think of. Not forgetting to mention our own special brew – Moon Gazer CELLARbration – which we brewed in collaboration with esteemed beer writer, and all round fab lady Melissa Cole. The beer, a ruby red audit ale weighing in at 6.6% abv and infused with cherries, honey, orange and mint went down a storm so do look out for it at a pub near you!

More than thirty brewers and representatives of the Maris Otter 50 found time to attend the party including; Arcadia Ales’ Dave and Kathryn who flew in from America, a seemingly evergrowing group from Spain representing Cerveza DouGalls and Stu from New Zealand’s Yeastie Boys. The Japanese brewer – Baird Beer – unfortunately couldn’t make it but its beer did and certainly made an impression as it picked up the bronze medal.

It was a genuine thrill to bring these brewers together and see them chatting to the growers and botanists who painstakingly keep this grain pure, to the maltsters who create the perfect brewing ingredient and to fellow brewers who share the passion for the malt.

As the private party ended it turned into a public beer festival for the good folk of Norfolk to enjoy for a couple of days – with so so many positive comments on what we had achieved – but more importantly so much more awareness that, in Maris Otter, Norfolk produces quite simply the finest malting barley there is.

We loved it, the brewers loved it and you loved it – so there will be more to come!

We have already thanked all those involved personally but a big thanks again – you all know who you are and you know we couldn’t have done it without you.

Proud of Maris Otter and proud to have created a showcase festival – now the journey continues….