A taxing question posed to our local MP 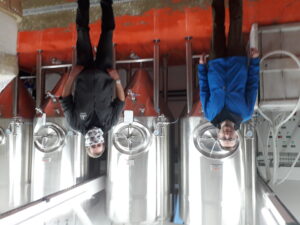 In amongst all of the day to day challenges which small breweries like ours are facing in this Covid world – we are faced with another rather pressing issue in that the Government is changing the Small Brewers Relief Scheme (SBR).

We were delighted that our local MP for North Norfolk – Duncan Baker – took time out to pop to the brewery to allow me to explain the impact that the proposed changes would have, not just on Team Moon Gazer but also on hundreds of other micro-breweries and the craft beer market in general.

It’s quite a long story so I will do my best to sum it up.

SBR was introduced in 2002 as a tax system which saw small breweries pay a more proportional amount of beer duty compared to the global giants of brewing who dominate the market. In fairness the discount was generous – 50% – but in the flip side at our level of brewing it is very hard to generate economies of scale made possible by size.

This discount would reduce barriers to entry and allow small brewers to be able to afford to invest in equipment, recruit staff, expand – in short to level up the playing field a bit.

Quite frankly yes it did, as it fuelled a huge growth in the craft beer market which saw the number of breweries rocket and the number of beers grow exponentially.

The market was rejuvenated to what we see today, more choice, more variety and an eclectic mix of brewery owners too! Rachel and me became a part of this in 2012 – incentivised to invest in our modern brewery by the opening up of the market.

This discount applied to all brewers producing less than 900,000 pints – or 5000 hectolitres in new money. A level which quite frankly we saw way off in the distance, after all, our passion is supplying Norfolk, with occasional incursions into Suffolk and Cambridgeshire – but driven by one to one contact of delivering our own beer to our customer with our team.

For many of our peers the ambitions are the same, for many they are less, some choosing to be even more localised and niche – and that’s the delightful market dynamic that the scheme created – a country blessed with over 1800 breweries and 7000 plus different beers a year.

Now, fast forward to today and the Government plan to cut the 5000-hectolitre threshold to 2100 hectolitres. In our pre lockdown days Team Moon Gazer were at 2,900 hectolitres so say hello to a big tax bill.

How big? Well they won’t tell us that bit as yet as that will be consulted on – potentially it could double if we lose the whole 50% discount. A tapered approach could still be likely – with duty paid in ever increasing chunks as we grow, however since they won’t tell us yet we have to be prudent and plan for the worst. In our case we could see our tax bill double.

So, here’s the rub. If you want to keep investing, keep growing and move up from a small micro, to a regional to a national brewer you probably think so be it. If, on the other hand your passion and drive is less modest – you are then faced with the reality that it makes more financial sense to cut back below the new threshold. How crazy is that?

Now, the treasury says that the reduction only affects 150 brewers – of which we are one – but that is an over simplification. As it affects the 80% of brewers below the threshold as it sets and dictates their own aspiration levels. Arguably it will stop new investment as brewers become disincentivised at the return on blood sweat and tears and hard-earned cash.

Now, don’t get me wrong – I have argued for SBR reform myself – as I see how the other brewers, many family owned who are strong regionals producing great beer and paying more tax – so there needs to be incentives for them as well.

How we get there isn’t cutting off the small guys – it’s like the Premier league saying let’s chop out all the leagues below – it will ultimately kill the industry.

So, all we are asking if for time out – to review the market dynamics, the reality of the changes will make on the ground not just what they show on an Exel spread sheet.

If you agree with us you can help by signing the petition to have the scheme reviewed – sign here.

We thank Duncan for taking time out to listen, and hopefully he and other MPs will reflect on when you have a market as diverse and frankly beautiful as the craft beer market – how you shape it needs to be for the long-term benefit and sustainability of all parties and not result in a polarisation of big boys and regional brewers.

After all, that is where we started and all agreed we needed change!