A trail of triumphs, tears and tangos 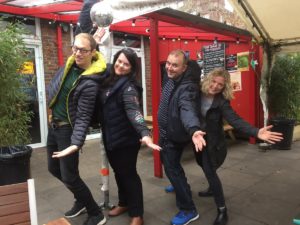 Take 140 hardy souls, 9 pubs and a generous sprinkling of goodwill and you end up with one very special day.

As the teams of enthusiastic trailers arrived at The Leopard, they all shared a common purpose to enjoy the day and to raise awareness of testicular cancer and its local charity It’s On The Ball, but also to raise a glass to Fred who was sadly taken from us by this cruelest of diseases.

But, the day was one of celebration and to use positive energy to prevent – as much as we can – other friends and family having to go through what Fred’s did.

To be fair it was also about pubs too – and a reminder of what a fabulous and crucial role that they play in their communities and how they can bring people together. In short, why pubs can be such an amazing power for good.

So, as 21 teams headed off around Norwich – resplendent in their It’s On The Ball pants – to complete the trail, little did the city know the sights that would confront their senses.

As they searched high and low for clues each team also had to complete a series of dance challenges which would result in Gangnam’s in Dove Street, wonderful waltzes, cheeky Charleston’s and questionable tributes to Adam and The Ants.

Admittedly – while there were some awesome displays – I doubt that messer’s Toniolli and Revel Horwood would be reaching for their 10s.

However, the real winners were hopefully Its on the Ball as the escapades of the willing trail volunteers soon started to set social media alight, and that was the aim.

If, by having a laugh and, in some cases being the laughing stock, we could get just one man to stop and think, and to realise that he had to check himself then the day would have been worthwhile.

So much so that the team down at St Bart’s, in London, who work tirelessly to treat sufferers joined in the fun – admittedly leading to a few tears when they tweeted “he’s our Fred too and we miss him”. A humbling moment, but one that makes you reflect just how important that the work is that Vince and his team at It’s On The Ball do.

They have one simple aim – to save lives by raising awareness – it really is that simple to make guys realise that they need to check their balls! This simple aim doesn’t cost mega bucks – all that it takes is for us to talk, to spread the word and get people to look at the website – do that and 98% of sufferers can, and will, be cured.

So, that’s what these trailers were doing – getting people talking.

There are so many people to thank – the teams, the pubs and the charity – and I wont list them all in fear of missing someone out – but you know who you are and you know that we think that you are awesome.

For those who we couldn’t involve this time we will get you next time – as we build on this event.

One special thank you does go out to Fred’s friends and family. This has been a tougher year for you than anyone deserves to face, so your dedication and commitment to honour Fred’s memory as a power for good has been so humbling and thankfully so effective.

I know that Its On The Ball are very grateful, as are we. So, let’s do a couple of really simple things – number one raise a glass to Fred and the team at It’s On the Ball – and secondly the next time you see a bloke remember to ask – have you checked yours?

Talking and silly dancing really can save lives.

Oh. And by the way well done to team Nutcrackers(pictured above) for winning the trail in a tie break!

Thanks again to all of those who took part – you’re the best.