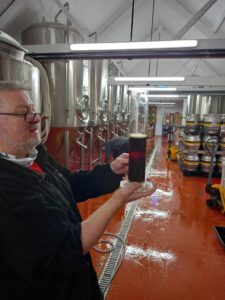 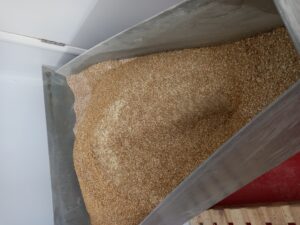 To have reached the milestone of our 10th birthday is a bit special, so we wanted to create a series of beers to celebrate this special year – and what better way to kick off with a 10% abv version of an existing Moon Gazer beer?

Now, after the last two years there’s a bit of a debate as to whether we have been actually brewing for 10 years – but ultimately the calendar doesn’t lie, and it is indeed 10 years since back in 2012 Mrs Moon Gazer and me stood in the brewery brewing our first amber ale.

Amongst all the excitement we forgot to put a whole load of the hops in, but since then we are pleased to say the team is recognised for brewing up some great beers.  We’ve won an ever-growing collection of local, regional and national of awards of which we are rightly proud – but what makes us even more proud is to have won an army of followers, fans and friends.  The Moon Gazer family.

So, back to our 10% anniversary ale – the stronger beer we have brewed to date.

The plan was to super charge and existing Moon Gazer beer – but you may be surprised which one….as we have chosen our dark mild Bouchart – and upscaling it a rather grandiose Bouchart X.

Essentially, we are using the same ingredients – with a bit of tweaking to maintain the balance, we also wanted to add a bit more darkness – so we’ve introduced some Cara Special three, a dark German malt which adds colour without any associated bitterness.

As you would expect, especially on our birthday, that the backbone of the malt comes from Norfolk Maris Otter – the star of so, so many Moon Gazer ales – with a rich complexity coming from the addition of chocolate malt, Crystal 240 and a touch of wheat. This will give Bouchart’s trademark liquorice, biscuit malt flavour, while the use of British hops Pilgrim and Goldings will add a touch of blackcurrant, honey and spice notes.

A beer to be savoured – a simple, unfussy recipe but one which delivers on so many levels. In a way that is the hallmark of Moon Gazer ales – we want to deliver great flavour but never seek to over complicate things just for the sake of it.

It’s an approach which suits us well and has stood us in good stead for a decade and hopefully will do so for many more to come.

Now, you will have to wait a little while before you can savour Bouchart X in bottles as it needs time to age, however, it will be ready for you to raise a glass with this Christmas.  But do look out for some limited-edition versions in wooden cask and also key keg,

Look out for more news on more birthday brews….