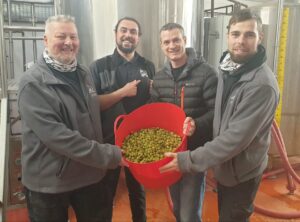 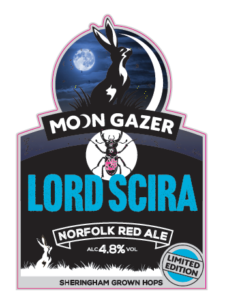 It’s funny how some things come together and our latest ale – Lord Scira – is a tale of how good can come out of most situations!

So, where to start?

Well, pre the ‘you know what C word’ we were very fortunate at Team Moon Gazer that a group of horticultural and beer enthusiasts from Sheringham grow us some hops which we use each year in a ‘fresh hop’ beer.

The fun challenge each September is for part of the team to start brewing while the rest pop off to Sheringham to pick the hops, bring them back and use them in the brew – you can’t get much fresher than that!

Last year we were unable to brew due to Covid restrictions etc and this year, as the brewery was flat and adjusting to the new normal squeezing the fresh hop beer into the schedule on the limited window of opportunity proved impossible.

But what to do? We wanted to keep the tradition going – we wanted to get back to creating a beer of Sheringham!

That’s where Jack from All Day Brewing, in Salle stepped in – “pick the hops on the bine, bring them to us and we will use our machine to strip them and freeze them ready for you to use them when you can.”  He said.

Well, that was music to our ears – and a great example of a brewery stepping into help us out. We will skip over the bit about the machine not working and jump straight to the bit where all was well, the hops nicely frozen ready to release their freshness.

We wanted to repay the favour and thought it fitting that Jack and All Day Brewing should be a part of the brew and so we got to thinking of recipes.

Obviously, the beer’s links to Sheringham were top in our thoughts and we got to thinking about Sheringham’s Viking heritage – indeed the word Sheringham is thought to be a combination of the Old Norse word for the Viking Lord Scira – pronounced “Shira” – and “Heim”, meaning home. Local folklore also sees many believe that the area was gifted to Scira in recognition of his bravery in battle.

In our minds we envisaged Vikings drinking red ales – and today traditional Scandinavian farmhouse beers are often dark, red and strong – so that fitted.

As for the malt we wanted to keep the heritage theme going and used a great heritage malt from Crisp Maltings called Plumage Archer – which also has a sweet note to it and has been found to help bring hop flavours to the fore – and so that fitted.  We also wanted to use Norfolk Maris Otter so added that to the mix. As for the red hue of the beer that comes from a German speciality malt which is de-husked to give the colour but not the bitterness – so a nice smoothness again allowing the hop characteristics to shine through.

The hopping was simple!  Admittedly we did use a touch of British Harlequin hops in the early boil, just to add a base, but then all the late hops and aroma hops come from Sheringham, a combination of British classics; Challenger, Fuggles, Goldings. How much of each who knows? It’s a discovery every year and we leave it to Mother nature to see what she has provided us with.

The great thing about this beer is also the start of a three-beer trilogy to allow the story to develop.

Lord Scira is the start, but the next beer which will be brewed at All Day will take a slightly wilder approach and look to evolve the beer into a more traditional farmhouse Viking ale, while the third part of the trilogy will involve oak aging both beers!  Exciting stuff.

But for now look out for Lord Scira – a true taste of Norfolk and Sheringham.