A zesty new brew for spring 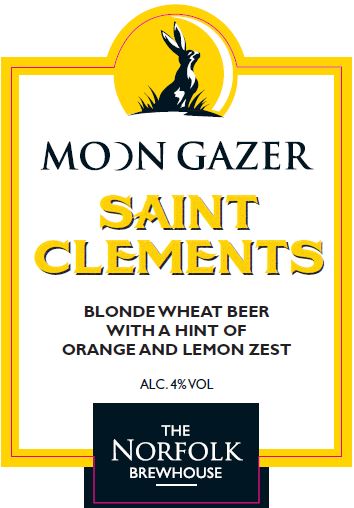 This beer – as well as tasting great – is also special as it’s the first brew by our new brewer – Bruce Ash. OK, so I may have tinkered a tiny little bit and suggested one of the hops but this is certainly Bruce’s first Moon Gazer creation and I know you are going to love it.

So what makes the beer special?

Well, we were looking for something light and golden to welcome in the spring – and also something which would stand out from our existing golden beers, especially as we had recently launched the new Golden Balls for It’s On the Ball Charity – a beer which went down very well too!

Wheat beers of Germany and Belgium are a particular favourite of ours and we wanted to bring a Norfolk twist to this style. Traditionally German wheat beers would use at least 50% wheat in the grain used for making the beer. We’ve not used that much, using a smidge over 30%, as we wanted to leave plenty of room for our old favourite – Norfolk Maris Otter. And that’s it, a very simple grain recipe of just two varieties with the light golden colour coming from the Maris Otter.

In medieval times Belgian wheat beers would use coriander, orange and bitter orange instead of hops. Our recipe followed this tradition in using orange peel as well as lemon, in equal proportions to infuse the beer with a rich, fruity zesty finish. It did mean all hands to the pumps – or zesters – as over 100 fruits had to have their zest carefully taken off so as to get all of the fruit flavour but avoid the bitterness which you can get from the pith of the fruit.

Hops were used as well, but only in small quantities as we wanted a smooth finish and only a small amount of bitterness. The bittering hop is Admiral – which lends itself well as it is a hop with orange characteristics, but we also used the German hop Hallertau and the Czech hop Saaz to add a gentle Bohemian pilsneresque backbone to the aroma.

The aroma is also helped by the use of a special wheat beer yeast strain which allows the beer to develop subtle banana and clove notes during fermentation. The yeast also contributes to another wheat beer characteristic a slight haziness, which is a combination of suspended yeast and also the proteins from the wheat, all perfectly natural and actually enhances the taste.

So, lots of thought has gone in to crafting this beer, do look out for it and enjoy it and raise a glass to the arrival of spring.