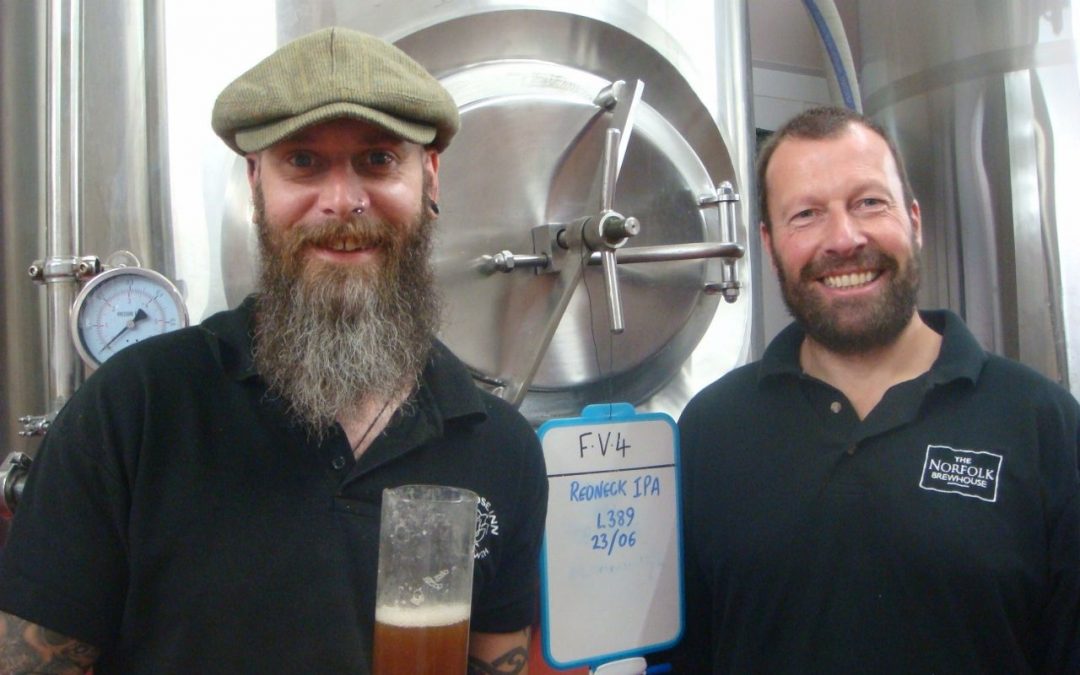 OK, before we go any further I have to be honest and say that I didn’t really know the definition of Redneck when its name was suggested to me by Carl at The Rose, in Norwich.

After all, the beer was a special beer for him and partner Dawn to welcome them back to the city pub so, who was I to argue? Indeed, my suggestion of Red Rose IPA would likely be a thorny issue for those of Yorkshire origin in Norwich, so the name Redneck IPA stuck.

By by the way and actually the beer’s style and final taste owes much to Carl and his love of southern American style, hoppy beers – so it does fit!

The brew was a small batch, one-off brew and as their idea it’s only fair that within Norwich it will be exclusively available at The Rose during July – yes, yes I know they caught me on a good day!

That said, the extra casks we had left over will be making appearances in a handful of pubs in North Norfolk, Suffolk and Cambridgeshire – but under the name Red IPA.

At 4.9% abv the beer is at the lower end of strength for IPA’s, but while we wanted a good deal of hoppiness we also wanted it to be more of a session IPA, with the fruit flavours hanging on a bit before the gentle bitter kick tingles on the tongue.

We also wanted the complex malt flavours to carry through in the finished beer, and with a combo of caramalt, crystal, rye and a bit of chocolate all adding something to our trademark backbone Maris Otter malt you will enjoy the five malts sharing the limelight with the American and New Zealand hops. The colour the malts produce is a deep amber colour with a red hue – hence the name.

The hops used include some favourites of ours from the USA; Cascade, Centennial and Simcoe ( what’s not to like in that little line up?), while two New Zealand hops – Wai-iti and Rakaa – provide some strong fruity flavours as well as some pronunciation challenges.

You will be able to enjoy this special brew at a combined launch and birthday party at The Rose on Saturday 8th July.

Sadly we can’t be there in person to raise a glass but do please pop along; enjoy it, and say thanks to the ‘Redneck’ behind the bar serving you!

It was a pleasure having Carl along to brew with us and hopefully you will have fun drinking his beer.