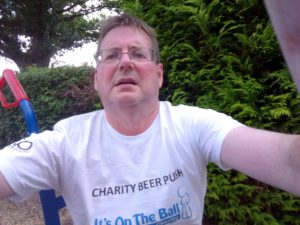 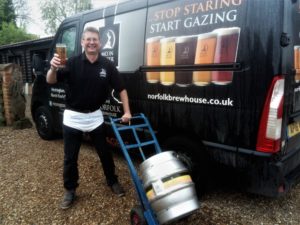 Well, there is no turning back now – our charity #beerpush is on for It’s On the Ball.

So, we thought that we would give you a bit of an update and refresher on what we are doing and also let you know how you can get involved, if you want to of course.

First off, and to avoid repetition, if you have missed the original full story you can check it out here.

So, as for the update;

The route is all planned out. ( Cheer’s to Vince at Its On the Ball for that.)

The dates are set – staring on April 23 2020. Mr Moon Gazer aka David will push a very bright blue barrel of beer on a trolley 140 miles from the brewery, in Hindringham to St Bart’s Hospital, in London.

The total weight he will be pushing is 66kg – since he only weighs in at 76kg that’s pretty much pushing his equivalent body weight. Still, that’s OK he only has to do 17 miles each day to complete the challenge in time!

Its not an easy 17 miles either as much of it will be on footpaths and tracks with gates and fences to lift the beer over.

The good news is that training is going well. Currently all of the training is on roads and pavements while he builds up stamina and speed.

If you do see a rather out of puff, red-faced man pushing a bright blue barrel of beer do give him a toot or whoop of encouragement. As training progresses he will be pushing his barrel to pubs, but for now he can mostly be seen around the Hindringham and Hellesdon areas!

Last weekend saw a milestone reached as he managed to push the barrel 8.5 miles non stop in 2 hours 20 minutes.

Training will continue with a minimum of 2 miles a day but with longer stints at weekends. The aim is to build to 17 miles non-stop before the end of December which will then allow 4 months for the hard bit – doing 17 miles on consecutive days.

In terms of the route from rural North Norfolk to central London here it is:

So, how can you get involved?

1. SPREAD THE WORD
Top priority is to help share the news with us on social media etc. The priority of #beerpush is to raise awareness of testicular cancer. 98% of cases can be cured if caught in time and so it doesn’t have to be the major killer that it is. Tell your friends! Oh, and do check out It’s on the Ball website here and follow them on social media.

2. JOIN US ENROUTE
David is determined to push the trolley all by himself every inch of the way. But it’s good to talk and he would love people to join him for a mile or an hour on the route. That will make it more fun and manageable and also help to spread the word.

3. PUT US UP FOR THE NIGHT
We will need two rooms each night – so if you know a charitable hotel near our stop point each night let us know. We are happy to drive a little way then drive back in the morning.

4. ORGANISE A GROUP EVENING
The fun side of the challenge is the push but we also want to bring the message about testicular cancer to everywhere we. So, if you have a club, group, team, school or company that would like us to come and do a chat at the end of the day we’d love to hear from you. The talk is serous in message but its fun too and it would be nice to enjoy a pint or two as we chat. So, get in touch if you would like us to visit you and your group.

5. JOIN IN THE FUN
Why not put on a fun fundraising event along the route and we will pop and see you? We’re open to any suggestions.

We will collect while we are pushing our barrel but if you could spare £1 that would be great and keep us going.

Seriously £1 is all we want as if we can get 1400 £1s then we know 1400 people now know about testicular cancer – so that would be awesome. So actually just donate 50p then we will get 2800 knowing about how to prevent the disease, but seriously do donate anything that you can.

Obviously, we will be self-sufficient if we need to but if you do want to get involved and donate time or products, then other help that we will need will include;

7. LONDON CALLING
If you are a London brewery why not join in the fun on the final day and push or just bring a barrel to meet us at St Bart’s on the day. You know us brewers like to get together and so it would help spread the word and be fun. Beer is a power of good.

We are open to any other suggestions so get in touch with us a info@moongazerale.co.uk

We’ve a couple of other exciting bits of news in the pipeline but can’t quite tell you yet, so do keep popping back to check out for updates.