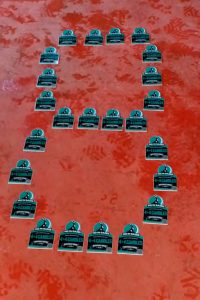 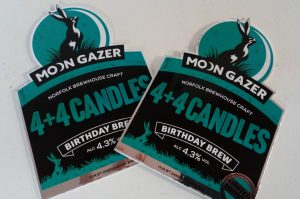 Can’t quite believe that another year has passed since pubs across Norfolk were ringing with the sound of happy Ronnie Barker sound-a-likes raising a glass of 3 + 4 candles for our seventh birthday.

We do like to bring a smile to people’s faces with our beer!

However, time has indeed passed and according to my list of anniversary names we’re heading back to the bronze age with our latest 4+ 4 Candles.  So, a lush bronze coloured beer is the order of the day as we celebrate with an all new birthday brew.

However, one tradition which we have decided to change this year is that of using the same number of hops and malts to corresponded to the anniversary – last year for example 7 hops and 7 malts.

As we head towards our teenage years, nice as the ideas was, we thought that this would soon become a bit of a challenge and so we will quit while we are ahead and just focus on brewing a great one -off brew without the need for an abacus to check we have the right amount of malts!

This year we thought we would celebrate with a UK hop.

Nowadays, so many of us brewers are using American or Pacific hops we thought that it would be great to show case some of the new hops coming through in the UK which aim to challenge their new world cousins in flavour and aroma.

The hop which we chose is called Godiva. This new variety has a lush fruity combination with notes of spices, white grape and tangerine.

It lends a freshness to brew while imparting a sweet, almost soft bitterness – so yes, the beer has a bit of beery bite to it but in a nice gentle way. For those if you who have tried the beers made from the Jester hop – then this variety is the daughter of that fruity, citrussy variety.

As for the malts – we haven’t stripped the number of those back quite as much as the hops – as we still wanted to get a good depth of flavour and malt complexity into the beer.

Yes, it goes without saying that our personal favourite malt – Maris Otter – is the key ingredient, but once again will be paired with a good quantity of Chevalier Heritage malt.

It seems from our recent special brews that you can really appreciate what this malt combo brings to the beer.   The Chevalier in particular seems to give a signature malt characteristic, with sweet notes of the past. We just love it and Maris seems to as well.

To create the colour for our bronze anniversary we use some Amber and Crystal malts while a sprinkling of Rye and Munich malt adds a slightly spicy note to the beer as well as adding to its richness and fullness.

The result will be a smooth malty beer with great depth in flavour and a soft hoppy fruitiness.

The brew will be heading out to pubs for the first week in February in time for our birthday – so, do please look out for it and enjoy.

Without you beer lovers we wouldn’t have made it to 8, and hopefully there are a lot more to come yet.  You keep drinking it and we will keep celebrating with special brews.

BTW I will be posting some more info on our first eight years but I thought it would be nice to let you know about the beer early.