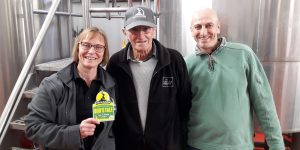 Our latest limited edition – Bob’s Tale – has been getting tongues wagging – thankfully for good reason as it appears that you love the new beer.

However, we are also getting questions on the recipe and the name – just who is Bob with a tale to tell?

Well the Bob in question is a very special part of Team Moon Gazer and one who we can confidently say without who we simply wouldn’t be here.

Bob is a certain Colin Bobbitt, the dad of Mrs Moon Gazer and the man responsible back in the 1990s for showing the young courting Moon Gazer’s the errors of their ways when we drank Kilkenny. Remember that?

It was Colin (AKA Bob) who would sit with us in the Fat Cat on a Sunday and introduce us to the wonders of real ale. If memory serves me right, in those days we would tend to settle on Summer Lightning which lead to many a lost weekend.

I digress, so anyway we decided that we should do ole Bobbitt the honour of brewing up a special beer as a thanks for all the good that he has done not just for his family but also countless people who have listened to his tales in his favourite watering holes, in Norwich, over the years.

‘Tell me your two favourite beers’ we said and we will create a beer for you to savour.

We waited with anticipation as to which Moon Gazer’s he would choose only to hear him utter the words, “Fullers 1845 and Oakham Bishop’s Farewell.  Cheers Bob!

In fairness two great beers, both of which pack a good amount of flavour and hoppiness but also retain strong malt back bone.

At 6.3% abv the Fuller’s recipe has the advantage of being strong (so you can pack loads of flavours in to it), but we all agreed on a more sessionable 4.8%, so some changes would be needed.

I have to say taste testing the Fullers it was an awesome beer – simple, old school malt and UK Goldings hops.  I reckon if you popped it in a bright yellow can, stuck a squiggly alien on it and it and called it something daft like ‘Ignamation’ the younger drinkers would lap it up.  To be fair it was a great reminder at how simplicity in a beer can be truly magical.

Mahognay in colour, the malt mix of pale, amber, chocolate and crystal create a great malt and biscuit base to support the spicy bitterness from the Goldings hops.  Love it.

To make it extra special we decided that for our pale malt we would use Maris Otter and Chevalier Heritage – the latter giving a good depth of biscuitness to the brew.

We then turned to what elements we need to blend in from Oakham – a brewery producing beers with a signature hoppiness to them.  In the case of Bishop’s Farewell that hoppiness comes from USA Cascade and Challenger – a good solid UK hop. We were able to balance those well with the Goldings and use lots of them at the end of the brew to add hop character while keeping the bitterness under check.

Recipe complete we were delighted that Colin, his brothers Maurice and Richard and son Mark popped along to the brewery on brew day to keep and eye on proceedings and join in the beer’s creation.

It was a day which will stick in our memory and one where we hope that we created a beer which will stay with all of you as well.

Time is all to short for us all, and brewing this beer reminded us of that – as it says on the pump clip – it’s time to savour.