Brewing up interest in coffee and ale 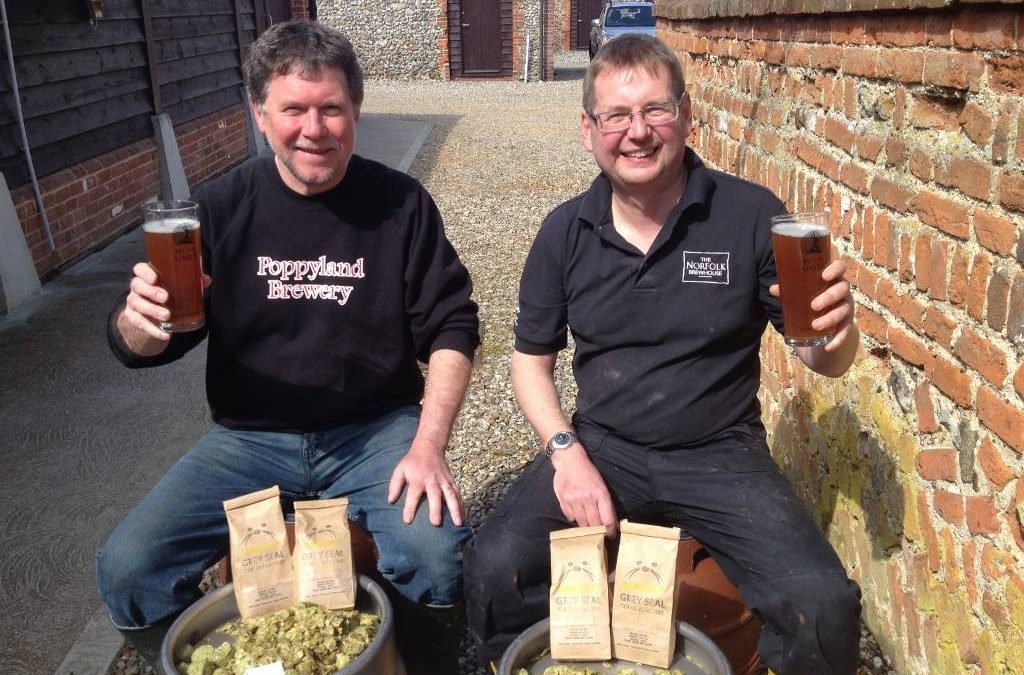 We have recently teamed up with two artisan drinks producers from North Norfolk to fuse the taste of coffee and beer, in a rather unusual way.

Both artisan roasted coffee and craft beer are experiencing a phenomenal explosion in popularity and so along with David from GreySeal Coffee, in Glanford and Martin from Poppyland Brewery, in Cromer, we thought it fitting to craft a drink which showcased the two distinct flavours.

The production of the drink also typifies the way in which the artisan food and drink revolution brings businesses and minds together to bring new experiences to consumers and is being brewed to celebrate the Norwich City of Ale Festival which starts on the 26 May.

While coffee beers are not new, they typically involve darker beers, such as stouts and porters, but we wanted to challenge this unwritten rule and provide a drink to test the skills of the brewers and also surprise the drinkers.

My vision was to have a coffee beer which was golden in colour – so when drinkers smell the aroma and take a taste, then the coffee would be a pleasant surprise. Ales of the unexpected you might say – but, in a nice way.
Collaborating with award-winning Martin Warren, of Poppyland Brewery, we chose to produce two different, but related ales, with the Poppyland ale being a strong 6% abv bottled ale, and the Norfolk Brewhouse ale slightly lower in alcohol, at 5% abv, and produced as a cask ale for sale in pubs.

Recipe development was an iterative process, involving many tests for both colour and flavour – something which itself was a challenge as Martin explains:
“Collaborative brews are great as two minds come together, one often pulling the other out of the comfort zone, but both pushing and challenging, but you need to end up with a balanced and eminently drinkable beer – not just one which is a gimmick – you want to showcase what Norfolk can do.”

“We decided that to balance the coffee flavour in a golden ale we would need to brew a hoppy IPA (India Pale Ale) style beer, using a blend of English hops ( Admiral) and American hops ( Centennial, Columbus, Cascade, Summit). Naturally, the base of the beer was Maris Otter, the premium Norfolk barley.”

Next to the all-important coffee from GreySeal, who roast coffee which is imported into the UK by Wild Coffee Conservation. The coffee grows in a protected biosphere, which is farmed exclusively by local communities – provided that they preserve the forest and farm sustainably. The project was set up to give added value to communities, by training local people to process coffee to a certain standard and export it themselves, instead of selling through internal markets.

GreySeal’s Head of Roasting and Development, David Lane explains the challenges of roasting the coffee for use in a beer as opposed to the usual Americano or Espresso:
“The brief from Martin and David was they wanted as much sweetness and flavour from the coffee without the usual bitterness, as the beer would have the bitterness from the hops anyway. The Ethiopia beans which we selected are naturally very sweet with a peach and honeycomb character. We also chose to cold brew the coffee rather than using hot water, as when cold brewed the sweetness from the natural processing is really enhanced and creates a creamy mouthfeel.”

However, the process for the coffee was not a quick one either, with each batch prepared taking up to 36 hours to impart the correct flavour, and that’s before it even got to the brewery.
As to the name of the beers the cask version will be called Moon Gazer Hop Bean IPA while the bottled version will be GreySeal Coffee IPA.

The artisan producers hope that people will enjoy the beers but also reflect on how local companies work together to bring something different to the bar.

The City of Ale starts in Norwich on Thursday 26th May and runs until Sunday 2 June. The beers will also be available throughout Norfolk at pubs and shops.