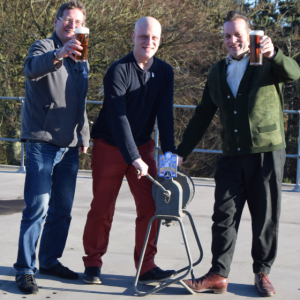 We are totally thrilled at the brewery that our Norfolk wide campaign to raise awareness of testicular cancer is receiving the support of local man, Cillian Nugent just days after he was given the all clear following his treatment for the cancer.

Cillian proclaimed his joy from the roof tops, quite literally, as he sounded a World War II air raid siren to announce the end of his treatment – but more of that later.

Here at team Moon Gazer ales we create a unique beer each January in support of Norwich based cancer charity It’s On The Ball, with the aim of getting men talking about the disease which is one of the biggest killers of young males in the UK each year.

The campaign is supported across Norfolk by the pub community – and this year will be the biggest campaign yet with over 125 pubs serving the beer called Tobi’s Tipple, Fred’s Check – so a massive thank you to all of you – your support is so much appreciated and really will save lives.

The support from the pubs is fantastic and really helps to get men chatting about what is a bit of a sensitive topic. To have Cillian be part of this year’s campaign is so positive, as it will help us get over the positive message that 98% of this cancer can be cured if it is diagnosed early enough.

All too often that is not the case, and young men needlessly die, as was highlighted last year when we named the beer Fred’s Check after Fred Riseborough who sadly was taken by the cruel disease at just 24 years old.

When we first learned that Cillian had been diagnosed with testicular cancer, we were shocked and concerned. He is well known to the brewery as he worked in a couple of our customer’s bars, that’s why getting the message out there is so important.

Cillian was actually travelling in Australia when he first noticed a lump which he soon realised he could not ignore. He had some knowledge of the disease due to earlier campaigns which the brewery had run for It’s On The Ball, but confesses that despite this, he was not a regular checker – however it had made him realise to act quickly, as he explains:

“I was in Australia travelling with my girlfriend when I felt a lump which I went to get checked out. When they tell you that you have cancer it is such a shock. I guess I am the same as any chap in their twenties, we feel invincible – well this quickly makes you realise that you are not.”

Fortunately for Cillian he received excellent care and after an operation and treatment he was given the all clear. However, the good news was short-lived as a regular follow up showed that the cancer had returned but this time had spread to his lungs, lymph nodes and back, as he adds:

“We decided to cut short the trip and return to the UK for the extensive chemotherapy treatment. It was tough physically and emotionally but you just realise that the alternative is far worse.”

“I was given the all clear on 21st December and rather than ring the traditional ‘all clear bell’ at the end of the treatment I thought I would use the air raid syren on top of the Control Tower Bed and Breakfast, on the former RAF North Creake Airfield, which is run by my mum Clare and dad Nigel. I wanted to be as loud as I could and boy did it feel great!”

“When David called me up and asked if I could join the campaign I didn’t think twice – after all we are trying to do such a simple thing – get blokes chatting. If, simply by having a beer men and women ask the simple question about the beer and then about men’s balls – then we are well on the road to saving lives.”

The small, dedicated team of trustees at It’s On the Ball are all survivors of testicular cancer, and rather than walk away and say thanks very much, after their own successful treatment, they tirelessly dedicate their time to telling other men about the importance of checking themselves monthly to look for early symptoms.

Fred’s Check – the 2020 edition – will be available in pubs throughout January 2020 – do check it out and check yourself. Find out how to check your balls at the charity’s website: https://itsontheball.org/