Celebrating a Norfolk heritage with a beer 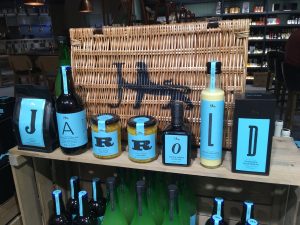 The name Jarrold is one of the most familiar and iconic family names in Norfolk – with a history of serving the county which stretches back over 240 years and seven generations.

Now, we can’t claim anywhere near that length of history for ourselves but our passion and pride in this fine county is well known.

So, as you can imagine, we were extremely honoured when Jarrold asked us to create an exclusive ale for them which encapsulates Norfolk in a beer.

As well as being a unique recipe for them, the team at Jarrold really wanted the whole ethos behind the beer to represent three key things; Norfolk, heritage and local community.

Creating a recipe then that didn’t just need to taste great it needed to reflect these three points in it.
Starting with the malt, using Maris Otter malted barely from Crisp Maltings – just few miles from the brewery – was the obvious choice.

Maris Otter is a fantastic Norfolk success story and as a barley variety will celebrate its 55th anniversary next year – quite an achievement when you consider that most modern varieties now last around 7 years before they are superseded.

The North Norfolk coast is recognised as one of the very best barley growing regions in the world, and such is the quality of Maris Otter that it is exported to over 20 countries to demanding brewers who are passionate about this elder statesman of malts. ( There’s even a Norfolk Maris Otter ice cream in Japan).

But we also chose to use a resurrected malt – Chevalier Heritage. The history of this variety can be traced back to 1819 when Rev Dr John Chevalier – from over the county border in Debenham, Suffolk – created his namesake barley which he propagated using an ear of particularly fine barley.

Chevalier malt lasted over 100 years before being superseded in the late 1920s, before making its return in 2014 as a heritage variety thanks to Crisp Maltings.

Norfolk’s two finest malts therefore create the Norfolk base for the beer – providing a deep biscuit/malt back bone – with a traditional flavour coupled with a rich complexity.

Deciding on which hop to bring the bitterness, flavour and aroma to the beer was tricky. We needed a hop which wouldn’t over power the malt tones, but one which would add plenty of traditional character.

A favourite British hop of ours is called Ernest. As well as delivering great flavour characteristics with predominantly fruity notes, especially apricot, citrus and spice, this hop also fits the heritage ethos which Jarrold wanted as well.

The hop, which is named after its breeder, Prof Ernest Salmon was first grown in farm trials in 1957 and 1958 but at the time was considered to be too American in its aroma. Confined to life in a seed collection, the variety has been resurrected in recent years by Charles Faram as today the strong flavours are top of brewer’s shopping list.

So, a heritage hop to go with our heritage malts – perfect. The missing part was then adding that local touch.

The key ingredient water adds that, as we use chalk filtered water drawn from our own well in the brewery. You can’t get much more local than that.

As a further nod to the Hindringham village which is the brewery’s home we enlisted the help of thousands of workers in the village. I say thousands as they were in the form of honey bees, which are kept by Steve Dye in the village.

The honey was added in just enough quantities to add a further complexity to the flavour without dominating – so don’t expect it to taste of honey – there is just a lovely subtle background note.

So, there you have it – how you take Norfolk heritage, the passion of growers and farmers and pop it in a bottle.

The Norfolk Heritage ale is now available in the Jarrold Deli.