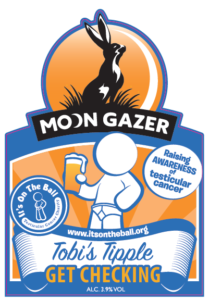 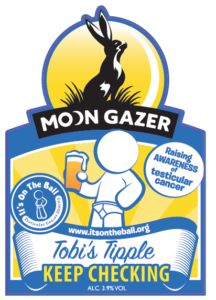 We are delighted that January sees the return of our Charity Ale – Tobi’s Tipple – and this year there’s not just one ale but two!

Each year the charity ale raises much needed awareness for testicular cancer and the work of Norfolk cancer charity It’s On The Ball. It also allows us to support pubs in the quieter winter times when they need support as well.

In recent years we have had Tobi’s Tipple – Fred’s Check named after Fred who very sadly died from the disease and also Tobi’s Tipple Golden Balls. Fred’s Check related to his love of checked shirts but also the importance of checking your nuts! That’s what we need the names to do – get people thinking of nuts and the importance of regular checks.

This year we have 2 completely new recipes and two new names for our special editions of Tobi’s Tipple – one for each ball I suppose you could say.

GET CHECKING will launch the campaign – a light amber ale which uses a British hop – the very fruity Harlequin hop which will be followed by a golden ale KEEP CHECKING which uses American hops including Simcoe for a citrus hit.

The hope is that the beers will get people talking – it’s more about raising awareness than anything else, what’s important is to get people chatting about the message which It’s On the Ball promotes – awareness of testicular cancer which you may be surprised to hear is actually the most common form of cancer among young men. So, as you see it may be a fun logo and name, but it’s a serious message.

The beers will be ready for delivery into pubs week commencing 3 January and will be available for the whole month.
You see by getting people talking about testicular cancer we can spot symptoms early and 98% can be cured! Well, that’s worth raising a glass to isn’t it?

We think that the team deserve all the support Norfolk can give them – so come on Norfolk check their website out: It’s On the Ball and follow on Twitter: @itsontheball

This is also a very special year for Team Moon Gazer as it is Beer Push year which will see David – aka Mr Moon Gazer – push a barrel of Tobi’s Tipple all the way from the brewery to St Bart’s Hospital in London and on to the Houses of Parliament.