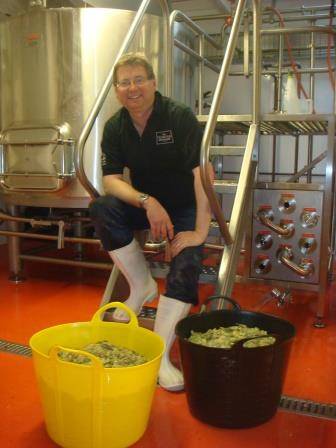 Today we brewed Tidal Gold, the Norwich City of Ale charity beer in support of the EDP Flood Appeal

Using over 10kg of hops including Cascade, Columbus, Chinook, Belma, Pilgrim and Mount Hood our 5% golden IPA promises to be a hoppy-treat. Initially soft and smooth, but building to a high level of hoppiness with blackcurrant and strawberry overtones and an IPA bite.

Norfolk Brewhouse will be donating 20p from every pint sold to the EDP Flood Appeal. City of Ale pubs that have already added their support and placed an order, include:

Orders will be delivered into pubs for the start of City of Ale on the 22 May. Brewer David Holliday (pictured with some of the hops) said; “Show your support for the EDP Flood Appeal and Norwich pubs – pop in and try a pint, along with the scores of other great Norfolk brewery beers available to try.”

Marion Turner from Norwich suggested the name Tidal Gold in a competition organised by the City of Ale and won herself a demi-pin of the ale, along with a pair of VIP tickets to the City of Ale Launch Party.

Find out more about all the events, beers, breweries and pubs involved cityofale.org.uk/2014/