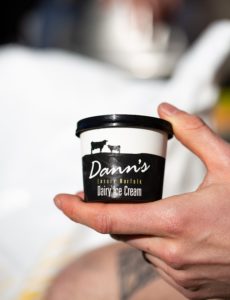 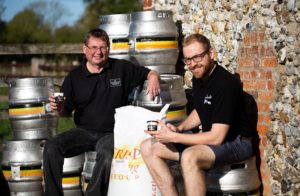 We’re thrilled that we have linked arms with another Norfolk artisan producer to create a brand-new product which celebrates the county’s world-famous Maris Otter malting barley – inspired by the East of England Co-op’s Sourced Locally initiative.

The new product is a malted ice-cream produced by Dann’s Farm Ice Cream, of north Tuddenham, with a lot of Moon Gazer know how – all designed to give us a tasty reminder of just how great Norfolk’s farmers are at growing barley.

Maris Otter barley is so important to our home county and beyond. Not only is it great that local Norfolk brewers have such a fine barley on their doorstep, but the fact that it is used by brewers all over the world – in over 20 countries – is something which is to be celebrated.

We were keen that people other than beer lovers could appreciate this success story and was thinking of ideas on how we could use Maris Otter barley in other products and not just our Moon Gazer ales and lagers.

The concept was inspired by a conversation with the team at the East of England Co-op, who spoke about their Sourced Locally initiative and mentioned Dann’s Farm Ice Cream.

The idea was simple but having contacted Dann’s it was clear that there would be certain challenges in the production but also in wanting to impart as natural and pure a flavour as possible. This is where the meeting of brewing minds and ice cream minds came together perfectly.

We knew that getting the maximum flavour out of malt is as much to do with science as craft, in that the malt releases the optimal level of sugars and flavours during very a precise process of quantity, timing and temperature.

We therefore realised to get the maximum flavour we would follow the exact same process as we do at the brewery but using milk instead of water.

The results were astonishing – not only was the flavour so deep and malty but it had an earthy naturalness we hadn’t found in other malted ice creams.

Following a few taste tests at local food fairs, we were bowled over by the response, not just to the flavour, but also to the appreciation of its Norfolk heritage.

The experimental recipe has gone into production for launch during the East of England Co-op’s Sourced Locally Fortnight which runs from 1- 15 June 2019.

Pop along to your local store for a tasting and enjoy the tasty combo of Norfolk Maris Otter, Moon Gazer ale and Dann’s Farm. A big shout out also to all at Crisp Malting and Mark and his team at H Banhams Ltd for all that they do to keep this barley variety as strong as it is.

We love it and know you will too! Enjoy.