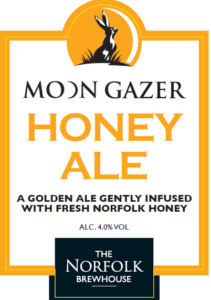 Bruce and myself had often thought about doing a honey ale – when done right this beer style can add a really nice twist to a golden ale, without needing to be over powering.

However, as with most things it’s a matter of waiting for the idea to come to the top of the pile as you try to keep up with the day job.

Thankfully a honey ale was soon to go shooting up the must do list when Steve – who lives less than a mile from the brewery got chatting about all of his bees while he ordered his favourite Dark Mild tipple.

Steve explained that he has hives across the village and that his bees were busy buzzing around producing some superb honey.

Now, anyone that knows what floats our boat here at Moon Gazer will know that local provenance is so important to us, and to have a rich source of top-quality honey right on our doorstep was to good an opportunity not to miss.
Enthusiastic as we were we did actually decide to contain our excitement and do a brew slightly later than planned.

This was mainly down to Steve, who mentioned that the flavour of the ivy honey was particularly rich and distinctive and to use some of that along with other honey collected during the summer.

I have to say that he was proved right as walking up and down the country lanes, resplendent in ivy hedges and ivy climbing up majestic oaks the bees are in a total frenzy. Now I’m no bee expert and I don’t know if it is nature’s way of knowing this is one of the last rich pollen sources of the year or it really is the bee’s favourite nectar – but boy do they go for it big time.

Our honey ale will be a dry, crisp and refreshing golden ale.

The honey will be used as an ingredient and will be part of the fermenting process, rather than just an addition. Although trickier to brew this way it ensures that the sugars within the honey are fermented out leaving behind only the lush aroma and flavour.

When combined with the malt and the hops the honey isn’t overpowering, just a nicely balanced, with malt and biscuit aroma leading to a honey finish.

As for the hops we were looking for an orange back note to match the honey and so chose Admiral and also some UK Cascade for citrus and floral notes, all supported by 100% Maris Otter barley.

So, there you have it local malt, local honey – local ale.

It’s going to be a limited edition as the Hindringham bees have done their work for the summer – but we are sure it will be back.

The ale will be in pubs towards the end of October and you will also be able to enjoy it at Norwich Beer Festival – so make a beeline for it there.

Apologies by the way for all of the bee puns.