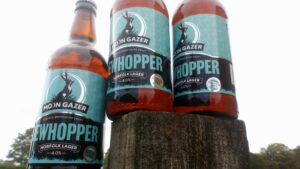 We are so proud of our DewHopper Norfolk lager – not only do we think it tastes great, but we also believe it to be the most awarded Norfolk lager there is – scooping a host of National and Regional awards ever since we first launched it in 2013.

It has become a key feature in our core range of beers, but we are pleased to say that it can now be enjoyed by those looking for a Gluten Free lager option as well.

Don’t panic – we haven’t tinkered at all with the recipe and it still uses Norfolk’s finest Maris Otter barley along with some local Clear Choice and Crystal malts. It also has the same blend of European hops – yup, it is exactly the same.

In fact, the lager doesn’t use gluten free ingredients but the addition of an enzyme reduces the gluten element to below 10 parts per million which is below the gluten free threshold. The result is a lager which has the same tasty, malty backbone as all of our lagers.

So how do we know it tastes as good as ever?

Well we have actually been brewing the DewHopper as gluten free for some time now but thought we would leave it a little while before we labelled it as such – just to make sure that we knew it was the same.

During this time of keeping it secret you were drinking more DewHopper than ever and also it took time out to win yet another award – this time a Gold award at the SIBA Digital Beer Awards 2020 for best standard strength lager in the Eastern region.

So, please do look out for the new labels which say Gluten Free on the front – and enjoy.

BTW what’s in a name? DewHopper is an old English name for the hare – describing as it does the hares hopping around in the morning dew.