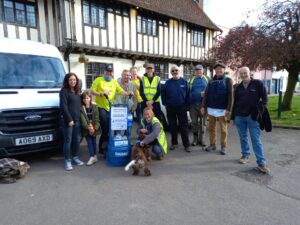 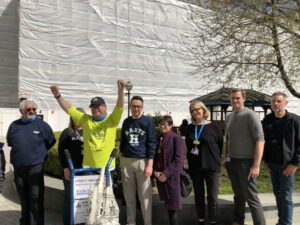 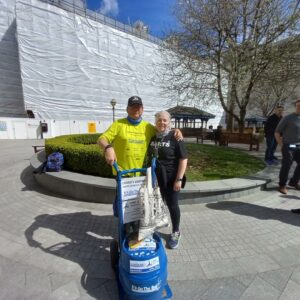 Well we only went and  blooming well did it – pushed 75kg 149 miles!!  BTW you can still donate here!

When I first set my mind on raising awareness of testicular cancer by pushing a 75kg barrel of beer 147 miles from the brewery, in Hindringham, to St Bart’s Hospital, in London little did I imagine the impact the event would have.

I also didn’t image in April that the 9-day challenge would be in freezing temperatures and snow – which was the case when I set of from Moon Gazer Brewery on Thursday 31 March, arriving in London 9 days later on 8 April.

The challenge certainly captured the imagination and is on track to raise double its original target of £9,800 – as I type this all things are looking like we will top £18,000. Truly amazing.

I originally set a target of £9800 as that was to represent the 98% of young men who can survive tis cancer – but crucially only if caught in time. Every few weeks delay in diagnosis can reduce that chance of survival right down to death. Pretty stark I know, but that’s the key message why I wanted to complete the challenge to make young men realise the importance of checking themselves monthly.

Just as I was about to take my first steps, my wife Rachel called me and said you just hit your target which was an amazing boost as I set off in the snow!

I was accompanied by Vince and Annie Wolverson of the local Its On The Ball charity who support cancer sufferers and also raise awareness amongst schools, colleges, businesses and sports groups.

I thought that he would be walking alone, but each day was joined by friends and indeed strangers who just wanted to lend their support. Supporters included ex Norwich City star Robert Fleck as well as friends and family of those who had lost loved ones to this cruel cancer, something which left its mark on me.

I had prepared myself physically for the challenge, training hard for 2 years, but I wasn’t ready for the emotional impact, it was truly humbling since people of all ages would arrive on the route and share their experiences of the cancer, or simply turn up and say thank you for what we were doing, there were plenty of tears shed but it spurred me on.

I arrived at St Barts Hospital – the major regional treatment centre for testicular cancer and was escorted in the last 3 miles by members of the oncology team – Shiv, Michelle and dan – you will forever be in my heart.

I dedicated 9 days to the challenge – nurses like Shiv, Michelle and Dan dedicated their lives to it – and it is in their name we completed the challenge.

It’s On The Ball charity will use the funds to spread the word and support patients.

If we can get the word out there and get young men to check themselves monthly we will save lives – it really is that simple.

So many people to thank but to all of you who got involved – BIG LOVE and thanks – same time next year?

You can still donate here.