For the love of Norfolk lager… 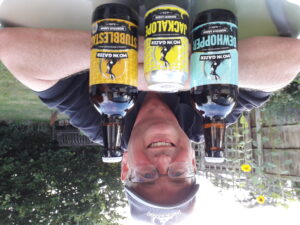 Back in the day – well, 10 years ago – when Rachel and myself started brewing at The Norfolk Brewhouse, the plan was always for a great line-up of Moon Gazer ales; after all, ale is our true passion. However, craft lager was also an important part of our plans, indeed our first Norfolk lager, StubbleStag, was our second ever brew back in March 2012.

Today, as a brewery we are immensely proud of the many national and regional awards our lager line up has won, but even prouder that they are enjoyed and respected by an ever-growing band of followers. However, it hasn’t been a journey without its challenges and misconceptions to overcome.

While our brewery was started at a time when craft breweries were springing up faster than Japanese Knotweed, lager was not initially swept along by this craft revolution. Yes, there were some great examples, but in the early days many of the new breed of brewers steered well clear.

The reason, in my experience, was simple and the first of the misconceptions to overcome. You see, mention lager to most self-certified beer experts at the time and they would answer based on their experience, which was limited to the homogenised national brands on offer – lager that was cheap, simple, commercial beer and not worthy of the ‘craft’ tag. Their appetite was for hop forward, hazy beers to shake up the beer world.

The reality is very far from this over simplification. Agreed, many national brands bow to commercial pressures and dumb-down mainstream lager in order to sell cheap and pile high. But the brewing of a great lager takes a lot more time, and no less skill, than that taken when brewing an ale, however hoppy, hazy, bang on trend or world changing an ale it may be.

How many craft, hands-on brewers will allow their lager to mature for nearly 100 days such as the superb Czech Budvar will? Big isn’t always bad, and it is wrong to characterise all ‘big boys’ the same.

Fermentation times for craft lager are typically two-to-three times than that of an ale. Add in the extended time for the lager to cold-condition and flavours to develop and you are looking at weeks for producing lagers compared to days for ales.

So, craft lager production was not for the faint hearted, or more importantly not for those start up brewers with limited vessel space keen to brew and sell rather than sit and chat to a tank full of liquid that could simply not be rushed.

The other hurdle to overcome was the purists – those who argued that for lager to be lager, only traditional lager malts such as Pilsen, Munich or Vienna could be used. These malts have developed over history to give lagers from their respective regions a certain characteristic, flavour, and colour.

“You can’t make a lager using Norfolk Maris Otter barley,” would come the cry when we proudly announced that was exactly what we do! You see, to us it’s more important we can brew a ‘Norfolk lager’ rather than a lager brewed in Norfolk. For us, there is a very big difference indeed. The locally grown malt helps to impart the very soul of what we do, the character of the local climate, soil, and barley that Norfolk is so famed for. With such richness on the doorstep, why on earth would you not use it?

And who is to say what a lager can and can’t include? To us that remains the brewer’s prerogative. Yes, of course you try to stay true to a particular style, but that is like saying all gins have to use the same botanicals.

Beer should embrace and excite and allow people to explore new flavours. Ultimately, the customer should be left to decide whether the lager we brew is worthy of its name. You can imagine the comments we got when we first launched our Jackalope Ginger Lager –maybe that was an ingredient too far for some! Not for me, it’s a great new twist on what lager can be, and also a national award winner.

And just before readers start screaming The German Beer Purity Law of 1516, otherwise referred to as Reinheitsgebot, that restricts lager ingredients to four – we do not brew in Germany, we follow Norfolk rules!

Admittedly when it comes to the hops used, we do follow tradition and use a combination of French and European lager hops such as Strissplat and Saaz, but we are so happy that they pair up with the king of Norfolk barleys, Maris Otter.

You may also be interested to know that the addition of Brewer’s Clarity reduces the gluten content to a level that means that our Norfolk lager line up of StubbleStag, DewHopper and Galton’s No.1 are all gluten free.

You see, here at Team Moon Gazer, we stick to our principles and proudly use Norfolk Maris Otter as the starring malt of all of our lagers. Add to that our chalk-filtered water and you have a true Norfolk lager, proud to impart a bit of our great county in every pint.

Oh, and we are pleased to report that so many more of the craft brewers are now adding to the UK’s rich diversity and array of craft lagers. It’s not a one or another choice; both ale and lager can be embraced for what they are, and we invite you to enjoy the quality of both and the craft and skill taken.

We’ll drink to that.