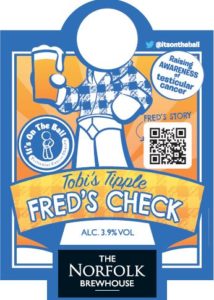 This year, once again Team Moon Gazer are very proud to be supporting Tobi’s Tipple, the charity ale raising awareness for Its On the Ball and testicular cancer.

Its an all new beer this year – called Fred’s Check, and it tells the very moving but important story.

Fred’s story is one which no family would ever want to tell – that of a fun loving, active, vibrant young man aged just 24, cruelly taken by cancer.

Fred had so much to give in life, his family and friends wanted to share his story so Fred can keep on giving – hopefully giving the gift of life to others who read his story.

In telling Fred’s story, we aim to raise awareness for It’s On The Ball Testicular Cancer Charity (IOTB) and celebrate Fred’s life, a man who loved wearing checked shirts and certainly enjoyed a pint.

Fred was diagnosed with germ cell cancer – the cancer which causes testicular cancer – but his cancer grew, not in his testicles, but in his chest cavity.

Just seven months after he was diagnosed Fred sadly passed away.

Fred was not aware of his illness until a tumour developed, which gave him breathing problems. Starting with an annoying cough, it was brushed off by an early diagnosis, as a fit young man who just had a cough.

By the time the cough developed, a later diagnosis was reached and Fred required intensive chemotherapy and fought so hard for every breath.

After a very determined effort by the team at St Bartholomew’s Hospital, London, and his friends and family, his lungs could no longer cope, when pneumonia took hold and the battle became too great, Fred died on May 1st 2018.

The tragic irony – and the reason to share this story – is that testicular cancer and germ cell cancer is one of the easiest cancers to cure – with a 98% success rate. Yet it is the most predominant cancer affecting young men – cutting short the lives of around 60 men just like Fred every year in the UK.

So, if 98% can be cured, just why do so many die? The answer is sadly so simple – and typified by Fred himself – the lack of early diagnosis. Spot this cancer early and you can get help, you can recover quickly and return to an active, healthy and long life.

The small, dedicated team of trustees at IOTB are all survivors of testicular cancer, and rather than walk away and say thanks very much, after their own successful treatment, they tirelessly dedicate their time to telling other men about the importance of checking themselves monthly to look for early symptoms.

Every year IOTB join forces with the Norfolk Brewhouse to brew a beer called Tobi’s Tipple. Served in pubs across Norfolk, the beer is designed to help men break down the barriers and talk about their ‘balls’ and the importance of regular checks. Chatting in a relaxed pub atmosphere and seeing Tobi’s on the bar helps break down those barriers.

When chairman of IOTB, Vince Wolverson, heard Fred’s story, he was keen that this year’s brew would be dedicated to Fred, as he explained: “Fred’s story highlights the cruelty of this cancer – it doesn’t discriminate, looking for the weak or unhealthy – it can strike anyone down.”

“Fred was a young man, physically fit, a regular gym-goer, active in both his work and play, a lover of the outdoors and a lad who had never had a single day off school because of illness.”

“In talking to Fred’s family and friends, we knew how much of a fighter Fred was, right to the end, and his passion for life was such he didn’t want to give it up. We hope that young men read and share Fred’s story and realise that it could so easily be them – and I would simply say check and check again, every month.”

It also seemed fitting that Fred was known for his love of checked shirts. Whatever the occasion Fred would arrive sporting a fetching checked number – it became his trademark in a way. His funeral even requested that checked shirts be worn.

The importance of ‘checks’ to Fred in life continue, even after his has gone – with a beer named after his love of checked shirts and with the meaning of the importance for men to do one simple thing – check!

Knowing Fred’s love of beer, Fred’s family mum Jo, dad Steve, sister Molly, partner Millie and close friends Chris and Amy wanted to remember Fred and help raise awareness of testicular and germ cell cancer. Steve, said; “Tobi’s Tipple Fred’s Check is just such a fitting tribute to Fred. He would love the fact that he had a beer named and brewed in his honour.”

“I know that if we can just get one young man who – after checking themselves – is successfully supported and treated that Fred would be looking down with a grin that would light up Norwich.”

Fred’s mum Jo added: “All of us, Fred’s family and friends were so proud of Fred in life – now he has the opportunity to continue making us proud. Obviously, we so wish he could still be here with us – but please, read and share Fred’s story and raise a glass of Fred’s Check.”

Fred’s Check will be available in pubs from 1 January 2019 – check it out and check yourself out.