From charity fest to the biggest beer festival of them all… 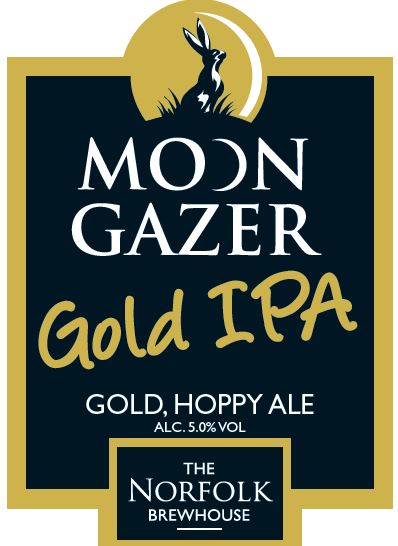 The Norfolk Brewhouse is to have one of our beers – Moon Gazer Gold IPA – showcase North Norfolk beers at this year’s Great British Beer Festival (GBBF).

The GBBF is the biggest beer festival in the country and takes place at Olympia, in London 8-12 August.

However, while we at the brewery is immensely proud to be selected, it may never have happened, as the Gold IPA was originally a one off charity creation.

The history of this particular beer starts four years ago at the City of Ale festival when following the severe flooding in North Norfolk the brewery was asked to produce a charity beer.
We came up with a plan to create a memorable IPA – a strong hoppy ale, and the City of Ale ran a competition to name the ale through the Evening News, with the selected name aptly called Tidal Gold, to recognise the impact on those local communities who suffered from the floods.

The beer, which uses Norfolk Maris Otter barley as well as five American hops is now permanently available from the brewery.

It was supposed to be a one off charity brew, but it is one which we are immensely proud as it was such a hit it and was voted best beer of the City of Ale festival, so it was added to our list of permanent ales, although we did change the name to Gold IPA.

We are delighted that it will showcase this year at the GBBF. On the back of this we hope to create another IPA to launch in the summer. It is certainly a beer style which is back in fashion amongst craft beer lovers and breweries.

Moon Gazer Gold IPA will be available at The Great British Beer Festival, Olympia between 8-12 August. For more info and tickets: http://gbbf.org.uk/