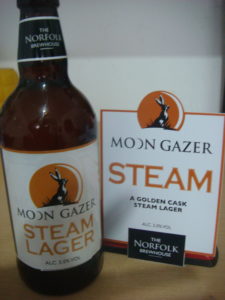 As Peter Gabriel once said – give me steam – so here we go with our all new limited-edition lager, joining our established DewHopper and StubbleStag Norfolk lagers.

So, what differentiates a Steam lager from our regular craft lagers?

Well, in a nutshell we use all the usual brewing disciplines and water profiles as we do for our other lagers, and use the same lager yeast but to create a steam lager we allow the fermentation to be a little bit more rapid and at a slightly higher temperature – closer to how we would ferment an ale.

In the case of this special we ferment at 18C instead of our usual 12C.

It’s a style of lager which first found popularity in the West Coast of America in the mid-nineteenth – and to be honest it was borne out of necessity rather than design – as the beer lovers who loved their European lager styles were a bit stuck in the coastal heat and without refrigeration.

There are a number of theories as to how the style got its name, but perhaps the most generally accepted one for modern-day steam beer is that of Anchor Brewing.

They say that the name ‘steam’ reflects the fact that the brewery had no way to effectively chill the boiling wort, opting instead to pump it up to large, shallow, open-top bins on the brewery roof. Here it would be naturally chilled by the cool air blowing in off the Pacific Ocean, with an aromatic steam cloud above the brewery as the hot liquor poured into the bins.

Whatever the origins of the name the fact is the brew is bottom fermented with a lager yeast but at a higher temperature more associated with ale. The result is that you get flavour profiles from both styles – a sort of hybrid if you like.

As for the ingredients, we have used some well-respected lager hops in Northern Brewer and blended then with some UK Cascade, while the malt sees Maris Otter pale join forces with some Euro Pils and Vienna lager malts, as well as some inverted sugar which adds its own character to the flavour.

This limited-edition brew will be available in bottle from early October and if you are really lucky you will discover one of the 4 cask versions we will be putting into pubs on a first come first serve basis.

Do look out for it and enjoy.