We were delighted this week when our new milk stout – Skiddadler won Gold at a prestigious regional award when it was named champion in the dark beer above 4.4% abv category.

This award – held by the Society of Independent Brewers (SIBA) – was for the keg version of the stout – and covered borders form 7 counties across the East of England – so a tough category to win indeed.

The cask version has also been getting plaudits – offering as it does a smooth, sweet and sift bitterness option for a stout.

The award follows on from an earlier Silver award for the can version – so this new beer of ours is really grabbing the attention.

Why not try it in cask or can now – coming back soon in keg! 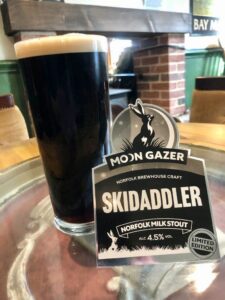 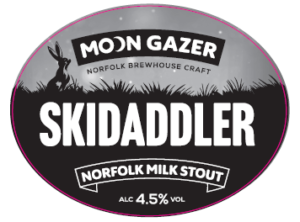 A reminder of how we created Skiddadler:
Time to rediscover the tradition of smooth, sweet stouts…Norfolk style

Well, it’s been a long time coming but we’re pleased to announce the addition of a milk stout to our Moon Gazer line-up.
We’ve been promising a stout for a long time, and to be perfectly honest I’m not entirely sure why its taken us this long – but hopefully you will agree it’s worth the wait.

Now, whilst today you will find a plethora of milk stouts offering you an array of taste sensations from blueberry, salted caramel, peanut butter, marshmallow and heaven forbid banana – our Skidaddler follows the tradition of malt, hops and lactose.
Oh, and yes, I use the word tradition advisedly.

The reason is one of added smoothness. The German’s – who are partial to a dark lager – wanted all of the darkness but none of the bitterness which comes from the roasting of malt. Some clever – or incredibly fussy brewer – soon worked out that the bitterness was in the roasted husk of the barley. Hey presto, simples – remove the husk and be left with just the flavour and colour.
That’s how we like it too.

Mind you, we confess that it did take an effort of will bordering on the superhuman not to sneak just kilo or two of aroma hops in.
As for the name, as you would expect from Team Moon Gazer, its once again taken from a local name for a hare, presumably earned by the hare’s ability to move or leave quickly. Not entirely sure why but it just fits the bill. It suggests a cheekiness and a freshness and a drink full of surprises.