Harvest for the world – grown right here in Norfolk 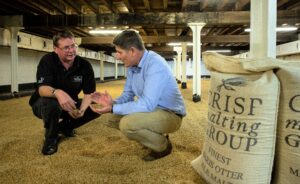 As the heat slowly ebbs from the sun, the nights draw in and the fields lay silent and still, we are at the time of year where – as a rural country – we celebrate the bounty that the harvest has given us.

OK, so some of the romance and magic may have gone out of the harvest festival since I was a young lad, but, it is still a very important time for reflection and appreciation of just what the land and the farmers give to us. This is particularly so as a brewer from a county where so much of the barley is grown to create beer!

While 2020 has been difficult in so many ways for us all, it’s also been a disappointing harvest too. As one farmer said to me; “Oh, we had all the right weather this year, trouble was it was all at the wrong times“. The result is that yields and crops have fared very badly. However, for one-star crop in Norfolk it marks yet another special year.

I refer to the barley variety Maris Otter – a champion variety which this year celebrates its 55th anniversary thanks to the demand from craft brewers and the hard work and dedication of the team at H Banham agricultural merchants, from Fakenham, who own the gene and meticulously keep it pure year after year to ensure its survival.

Just to put a bit of context into why a barley variety should be chuffed about reaching the ripe old age of 55. To start with, most modern varieties last about 6-7 years before they are replaced by something which offers higher yields, lower cost, faster growth or a combination of all three.

However, as far as Maris Otter is concerned you can keep that so called ‘progress’ – this champion of malts has stood the test of time simply because craft brewers – like team Moon Gazer – demand the flavour and quality it brings to beer.

Maris Otter is undoubtedly respected as the brewers’ premium malted barley and is gaining a growing global reputation – exported as it is from Norfolk to over 20 countries where brewers insist on a bit of Norfolk’s finest!
Those of you who know me will appreciate that I can wax lyrical about this barley not simply because it helps us make great Moon Gazer ales and lagers – but because it spreads the word of Norfolk across the world.

It genuinely makes me proud of the farmers and maltsters who can create a product which will be shipped thousands of miles with the name Norfolk emblazoned on it because of its natural quality. In this throw away society its nice to know quality matters and Norfolk matters.

Speaking of which the success of beers receiving the title Champion Beer of Britain with Maris Otter used as the base malt is testament to its quality. I may be slightly out but I believe in the last 20 years 15 of the champion beers use Maris Otter.

So much is often made – and rightly so – of the brewer’s skill in creating great flavour and aroma with the hops which make the beer distinctive but credit must also go to the malt which provides the strong, balanced and flavoursome base.

To put the success into context Maris Otter has about 6% of the malted barley sales to British brewers. So, for a beer brewed to win a Champion Beer of Britain accolade it is up against an awful lot of beer brewed with the other 94% of the malted barley. Winning the title once is great, but to be so dominant over such a long period of time is a truly fantastic achievement.

However, for me I am also so proud of the connectivity Maris Otter brings to our beers, we see the barley growing in the fields, we know and chat to lots of the farmers and the harvest is malted a few miles away from us at Crisp Maltings, of Great Ryburgh. It’s great to be part of that community.

So, next time you order a pint, make sure its brewed with Maris Otter and raise a glass to the farmers and to this unassuming global superstar!