Hopping across the pond for Norfolk Day 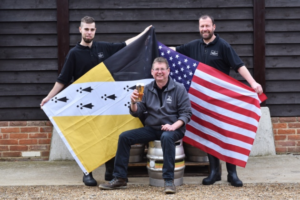 A creative EDP reader has conjured up a play on words which will now be the name for our very special Norfolk Day beer which will be served across the county and in Norfolk, USA to celebrate Norfolk on Saturday 27th July.

We are brewing a special addition to our Moon Gazer beer range, this time with an international Norfolk flavour as we’ve teamed up with Smartmouth Brewing from Norfolk, Virginia.

We thought that it would be fun to give EDP readers the chance to enter a competition to name the celebration brew and the winning name – Pond Hopper – was chosen Kevin Lee, an active wildlife and art lover from Norwich who has been in Norfolk over 25 years. His winning entry was chosen from over 50 different names.

We wanted to create a beer to celebrate the work of Norfolk farmers and brew a special Moon Gazer ale made out of Norfolk Maris Otter barley.

But, we also wanted to use the opportunity to reach out to other Norfolk’s and were absolutely thrilled when Smartmouth said they wanted to be part of the celebrations.

We really hope that this could be the start of stronger connections, by all sorts of people and organisations, between the two Norfolk’s as we share so much history between us. As Norfolk Day is for the whole county, we also wanted to give the readers of the EDP the chance to become involved and name the beer.

The winning name was chosen as it was a clever play on words and captured the spirit of the project and the beer.

The beer will be using American and British hops so we wanted to include a reference to the ‘hoppiness’ of the beer in the name but also wanted to include the fact that the team from Smartmouth were crossing the Atlantic – referred to as ‘the pond’ to visit us on Norfolk Day.

So, Pond Hopper seemed to sum it up perfectly.

Kevin’s name will now be turned into a design for pubs to display and promote the beer on their bars.

A stronger version is also to be launched by Smartmouth in Virginia on the same day so truly taking Norfolk Day international.

The beer will be available in pubs across Norfolk -England and Norfolk USA on July 27 2019.